Continuing the good news from my previous post, it’s time for another dose of positive good news in today’s Good News Friday installment.

Our first item for this week is from Israel’s Master Chef TV program, of all places. One of the contestants was a most remarkable woman – Sara Zouabi – and the mother of an equally remarkable young man – Mohammad Zoabi.  What was unusual abotu Sara Zouabi was not only her excellent cooking skills, but her amazing and courageous announcement that she is a proud Zionist:

Sarah Zoabi introduced herself to viewers as an “Arab, Muslim, Israeli, proud Zionist” from the northern city of Nazareth. When one of the show’s judges asked her to elaborate on her nationality and beliefs, she said, “I believe in the right of the Jewish people to have their own country, which is the state of Israel, the holy land.”

“I’m sure that the people who hear me will say: ‘what, have you lost your mind? How can you say you are a Zionist?’ I want to say to all the Arab [citizens] of Israel to wake up,” she continued. “We live in paradise. Compared to other countries, to Arab countries – we live in paradise.”

The contestant also elaborated on her loyalty to Israel, saying she doesn’t have “another state” or “another flag” with which she identifies. She added, “With all due respect to [the Arab] nation, this doesn’t imply treason. I never harmed anyone.”

Praising the Jewish state, she said there is no other country where she could receive the same freedoms as in Israel. She asserted that 100 percent of Israeli Arabs would prefer living in Israel over Palestinian rule, if given the choice.

“No one will agree. That’s what I believe,” she said. “It will cost me, I know that. Same way it cost my son. I’m the mother of the Arab boy, Muhammad Zoabi, who’s life was threatened and who faced death threats over his opinions.”

Indeed, you can read about the serious security problems faced by Mohammad in my links above. The fact that they are relatives of the notorious and treasonous MK Hanin Zoabi only makes their courage stand out more and highlight Hanin’s treachery.

Watch the video of this wonderful woman simply and clearly stating her love of Israel.

The words Kol hakavod are not quite appropriate and nowhere near strong enough praise for Sara Zoabi, who has passed on her strong principles to her son. May they both stay safe and continue to be proud spokesmen and goodwill ambassadors for Israel.

While we’re on the subject of pro-Israel activism, here is another great supporter of Israel – the British MEP (Member of the European Parliament) Steven Woolfe, from the UKIP party:

Kol hakavod to Mr. Woolf. Would that all British MPs and all European politicians were as strongly supportive of Israel as him. May Mr. Woolf continue with great success in his work in the European Parliament, and may he have a positive influence on all the political and diplomatic activity going on there.

Some more excellent news coming out of the UK (at least for some people) – my favourite sandwich filling Marmite is kosher again! (h/t Henry):

Imports of the kosher Marmite produced in South Africa were halted by manufacturer Unilever in 2014 leaving lovers of the yeast extract spread with bare shelves.

However after months of talks with the Kashrut division of the London Beth Din Unilever have agreed to produce a brand new 70g jar on a separate production line.

The existing Marmite products are produced on a production line that also carries non-kosher products, so could not be heschered.

Production on the new kosher version starts next week and the jars are set to be in kosher shops from the end of next week.

Unilever said it is looking at introducing other jar sizes in the future.

Golders Green resident Simon Kalman, who got in touch with the JC when he realised he could not longer buy the South African imported Marmite, said: “It’s seriously good news for those who like Marmite.

“I hope it is going to be widely available and not outrageously expensive.”

Before you all drool with delight or groan in disgust at the thought of Marmite on your kitchen shelves once more, may I remind you of a very important role that Marmite played in almost bringing peace to the Middle East!

I kid you not.

EDWARD DE BONO, the guru of creative thinking, has been called in by the Foreign Office to help sort out the Arab-Israeli conflict. Ever willing to help, he has conjured up a solution straight from a jar – Marmite.

The celebrated master of lateral thinking is promoting supplies of the yeast extract spread as the means to resolve the region’s seemingly intractable problems.

The logic, briefly, is this. A lack of zinc makes men irritable and belligerent. You get zinc in yeast, which is fine for your average lover of Mother’s Pride. But in the Middle East, the bread is unleavened. Ergo, the great man says, Marmite is the answer to easing the way to peace.

He was confident his zinc theory would be proved if only hospitals in the Middle East would co-operate in tests. But he conceded they probably would not.

How successful he has been will become apparent only with the publication of next year’s Marmite sales figures.

First of all there’s a flaw in De Bono’s theory. The only unleavened bread eaten in the Middle East is by Jews on Pesach, and only for 7 days. Nevertheless, who knows what might have happened if Marmite had remained kosher?  Both Jews and Muslims could have eaten it to their hearts’ content and peace would have broken out. Unfortunately it was not to be.

But now the good news has arrived – what are the odds that a Marmite-flavoured Middle East peace treaty will emerge? Any moment now… 😀

From the ridiculous to the sublime, Israeli gymnasts won gold, silver and bronze medals in international competitions this month. 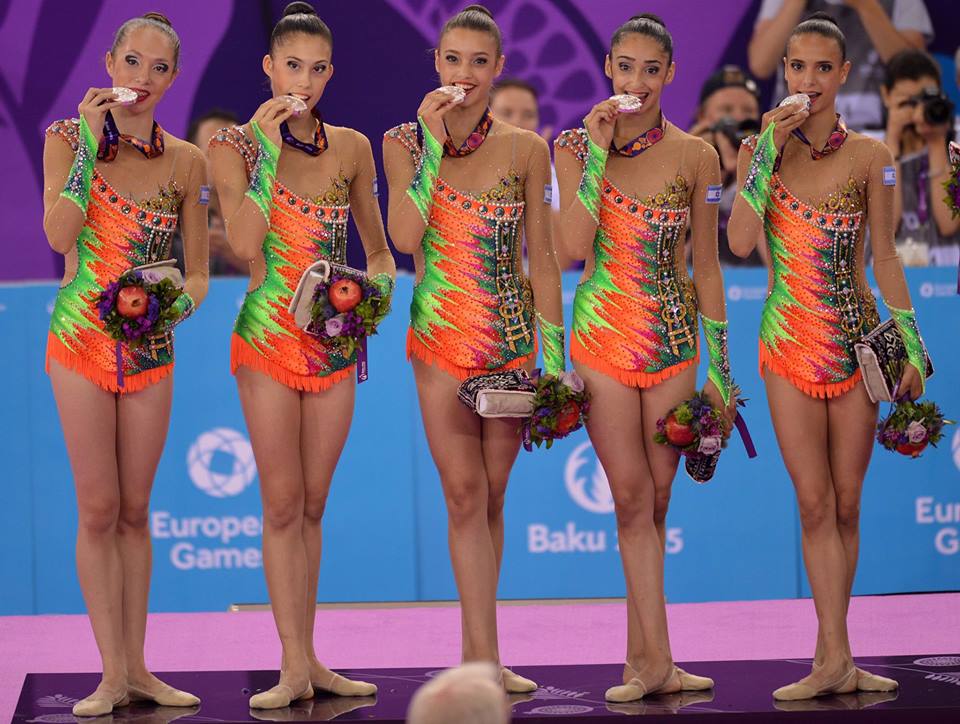 Kol hakavod to all the gymnasts and their trainers! You have done yourselves and your country proud!

Meanwhile in Italy, Moran Samuel, the Israeli paralympic athlete, won the gold medal in rowing at the 2015 World Rowing Cup in Italy:

Samuel made history by not only shattering her own personal record, but she also broke the Israeli record while defeating the reigning world champion, Norwegian rower Birgit Skarstein.

The Israeli rower crossed the finish line with a time of 5:15.77.

Samuel has been guided by her Italian coach, Paula Grizati. She has also trained extensively at The Daniel Rowing Center in Tel Aviv.

“Moran gives it all she has during training,” Grizati said. “She displays professionalism, and she has made consistent and impressive progress. She deserved to win.”

Kol hakavod to Moran Samuel on her very impressive win. May she go from strength to strength in all her future competitions.

I’ll finish this week’s post with one more BDS Fail. An Israeli Irish Dance academy, the Carey Academy, will be holding an Irish Dance festival (or Feis), and Irish dancers are being urged to boycott the festival. The Irish Carey Academy rejected the boycott call, anf following this, there appeared a most amazing and heart-warming anti-boycott opinion column in the Irish Independent (h/t Reality):

All cultures, we are told, are equal. But some are less equal than others.

Thus, it’s perfectly acceptable to sneer at America, and it is positively de rigeur to libel Israel as a genocidal, Nazi, apartheid state that is, as Vincent Browne disgracefully claimed, a ‘cancer’ in the Middle East.

The ongoing BDS (Boycott, Divest, Sanction) movement has been loud and shrill in their calls for a complete boycott of individual Israelis, regardless of their own political affiliation.

The latest example of this racist profiling comes with the news that Israel’s first Irish dancing festival is now the latest target of the BDS bullies.

An Irish dancing school, the Carey Academy, was hoping to hold the feis in Tel Aviv in August, but it was instantly trolled by the usual worthies who were quick to accuse them of “being on the wrong side of history. Don’t shame our name.”

Israel is not, by any standard, an ‘apartheid’ state, no matter how many times this slur is repeated. Israeli Arabs sit in the Knesset, hold high office, and proudly represent the country in sports, science and medicine.

The campaigners know that when it comes to informing people who don’t really care one way or the other, using such inflammatory devices as “apartheid” provides a shortcut for people who don’t have the time or the inclination to actually educate themselves on the issue.

To the eternal credit of the Carey School, it didn’t immediately buckle in the face of such unsolicited harassment.

Instead, it issued a rebuttal which stated: Running a feis in Israel does not mean we support or are involved with the Israeli government or any extremist groups,” while one of the judges of the contest asked: “Once we go down that road, where do we stop?”

That’s a good question, but one that provides its own answer – these campaigns will end only when Israel ceases to exist.

Where are all these heroic ‘human rights’ activists when it comes to the actual abuses in China, Cuba, Sudan, Russia or any of the dozens of other countries that are run like virtual prison camps?

Where are all the human rights activists when Hamas openly declares its intention to kill every Jew?

More pertinently, where are the protests against Egypt, which also has a border and which treats the Palestinians abominably?

The Middle East is burning. The countries bordering Israel are succumbing to civil war, genocidal extremism and primitive savagery.

Let’s be clear, Israel is the only beacon of 21st-century civilisation in a region where medieval savagery holds sway.

And yet, bafflingly, that is the country we choose to demonise.

Kol hakavod to Ian O’Doherty for his brave column (yes, in today’s atmosphere when it is so fashionable to be anti-Israel it takes quite an amount of courage to publish a contrary opinion). Let’s hope he gives the boycotting bullies something to think about.

Maybe we should feed them all Marmite… 😉

And on that inspiring and tasty note, I wish you all Shabbat Shalom!