Hitting back at the UN 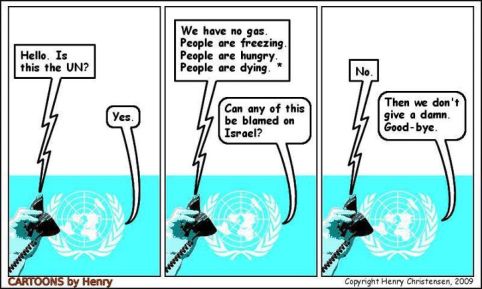 Perhaps under the influence of US Ambassador to the UN, Nikki Haley, who has taken a staunchly pro-Israel stance and has castigated the UN several times for its anti-Israel bias; or maybe because of the wave of terror attacks hitting Western cities; but no matter the reason, it is heartening to see the change in atmosphere at the UN Human Wrongs Council.

Once again, all the Western countries boycotted the annual “Agenda 7” Israel-bashing debate at the UN Human Wrongs Council.

The world’s democracies collectively snubbed the UN Human Rights Council’s annual condemnation of Israel in Geneva on Monday, when none of their representatives attended the council’s presentation and debate on  “Item 7” — a permanent agenda item focused on the “Human rights situation in Palestine and other occupied Arab territories.”

As was the case last year, the seats of all the democratic nations represented on the council were empty for the duration of the discussion, sparking protests from Arab countries.

The United States has never attended an Item 7 debate since the council was established in 2006 as a successor to the Commission on Human Rights. In an address to the council on June 6, US Ambassador to the UN Nikki Haley charged that “Item 7 is a scandalous provision that must be removed.”

Hillel Neuer — executive director of the Geneva-based UN Watch NGO — told The Algemeiner that the non-attendance at Monday’s session signaled a “significant stand by the Western democracies against prejudice.”

Neuer added that he himself had taken part in the debate primarily to point out why the democratic countries were absent. “Hopefully, one day Item 7 will be removed,” he said.

In his speech before the council, Neuer observed that “the US, Canada, Australia, all European Union member states, Japan, and other established democracies have boycotted this debate.”

Neuer continued: “The democracies are absent to protest prejudice — because this is the only agenda item that singles out one specific state, the Jewish state, for differential and discriminatory treatment. Not Syria, Sudan or North Korea is treated this way.”

Nonetheless, the absence of these countries did not prevent routine denunciations of Israel, with serial human rights abusers like Syria, Lebanon and Venezuela attacking Israel’s human rights record and depicting it as the “greatest threat to peace in the Middle East.”

This year’s Item 7 debate began with a report from the United Nations high commissioner for human rights, Jordanian diplomat Zeid Ra’ad Al Hussein, that slammed Israel for its record in implementing the recommendations of various UN bodies and officials since 2009.

Excoriating Israel for what he described as its “repeated failure to comply with the calls for accountability made by the entire human rights system,” al-Hussein warned that the Jewish state could face another negative advisory opinion from the International Court of Justice (ICJ) if it did not begin implementing UN recommendations. In 2004, the ICJ ruled that Israel’s West Bank security barrier was a violation of international law.

Hillel Neuer did not take this vicious attack lying down.  This is what he had to say:

Mr. Chair, as I look around the room, I note for the record that, as Oman, Lebanon and others complained, the U.S., Canada, Australia, all European Union member states, Japan, and other established democracies have boycotted this debate.

I have stayed to explain why. The democracies are absent to protest prejudice — because this is the only agenda item that singles out one specific state, the Jewish state, for differential and discriminatory treatment. Not Syria, Sudan or North Korea is treated this way.

Democracies like the U.S. and Canada stayed away because this debate is designed to invert terrorist and victim. On Friday, next to holy sites in Jerusalem, Palestinian terrorists carried out two simultaneous stabbing and shooting attacks, killing 23 year-old Hadas Malka. Both ISIS and Hamas claimed responsibility.

To his credit, UN envoy Nikolay Mladenov condemned Hamas for praising the attacks as ‘heroic.’ Yet why is it that the ‘State of Palestine’ just spoke and refused to condemn the murder?
Why, instead, did his government condemn Israel for the deaths of the attackers, calling it a ‘war crime’?

The inversion of Friday’s terrorist attack is the same inversion underlying today’s report, which seeks to follow up the 2009 Goldstone Report that accused Israel of war crimes for responding to terror attacks by Hamas — just as France, the UK and every other democracy now must respond to Jihadist terrorism.

Finally, Mr. President, why is the UN still trying to implement the Goldstone Report, when its author Goldstone famously retracted its core charge?”

Adding to the scorn poured onto the HRC, the brilliant Anne Bayefsky of the Touro Institute on Human Rights and the Holocaust, castigated the UN HRC for ignoring the very antisemitism present at the UN and at the HRC because it did not fit their agenda. Watch her video below:

Another example of antisemitism could have been heard quite clearly at the Security Council where a veteran Algerian “diplomat” compared Gaza to a concentration camp – for which he was condemned by a spokesman for the US Mission to the UN:

“Indecent and irresponsible remarks such as these are another example of the anti-Israel bias at the UN that has to end,” a spokesperson for the US mission to the UN told The Algemeiner following the speech at a Security Council meeting on “the Middle East, including the Palestinian question” given by Lakhdar Brahimi, a former Algerian foreign minister and UN envoy to Afghanistan, Iraq and Syria.

During his address, Brahimi — who spoke as a member “The Elders,” a body of global influencers gathered under the auspices of former US President Jimmy Carter — sympathetically quoted a Palestinian woman in Gaza who told him, “Israel has put us in a concentration camp.”

Israeli Ambassador to the UN Danny Danon slammed Brahimi for having made “no mention of Israel’s legitimate right to defend its citizens.” Israel has faced three wars launched by Hamas from Gaza in the previous decade.

“The Security Council has provided a platform to antisemitic comments and a malicious blood libel,” Danon declared in a statement. “This one-sided obsession with Israel is beyond the pale. To accuse the Jewish state of using concentration camps is not only despicable, but it degrades the Security Council and the UN as a whole. We demand that the Security Council renounce Brahimi’s statement immediately.”

The US spokesperson added that American diplomats at the UN had been aware that Brahimi’s presentation might spark uproar. “We insisted on having an alternative briefer, which is why Michael Doran spoke today,” the spokesperson said.

Doran — a senior fellow at the Hudson Institute in Washington DC who served a senior director in the National Security Council under President George W. Bush — told the Security Council the UN “routinely accords Palestinian-Israeli relations a special status that hardly seems justified on the basis of objective observation.” He then criticized the UN for its lack of attention to a range of other regional security challenges, such as Iran’s arming of the Hezbollah terror group in Lebanon.

You can watch Michael Doran’s address to the Security Council here:

I’m still at a loss as to why any Western countries still belong to the UN as it stands today. And of course this applies especially to Israel. It’s way beyond time for the UN to be disbanded and a new organization, consisting of only democracies, to be established in its stead.

3 Responses to Hitting back at the UN