We are right in the middle of Chanukah, entering Shabbat Chanukah in a few hours, so here is a special, Chanukah-themed Good News Friday post.

Let’s start with a very well timed for Chanukah, incredible archeological find – a Hasmonean-era oil lamp literally stumbled upon by a mother and her young daughter in the Bet She’an area: [The Maccabees from the Chanukah story, who fought the Greeks were known as Hasmoneans]:

Last week, while out for a stroll near their home in the historic Beit She’an Valley, a mother and her seven-year-old daughter discovered a rare, intact 2,200-year-old clay lamp.

While Ayelet Goldberg-Keidar and her daughter Hadas, residents of Kibbutz Beit Alfa, were on an afternoon hike climbing the mounds near Kibbutz Nir David, Hadas suddenly noticed a pottery vessel lying at the mouth of a cave.

Excitedly, Hadas picked up the vessel and her mother — coincidentally an archaeology student at Haifa University — quickly realized that this was no ordinary lamp. 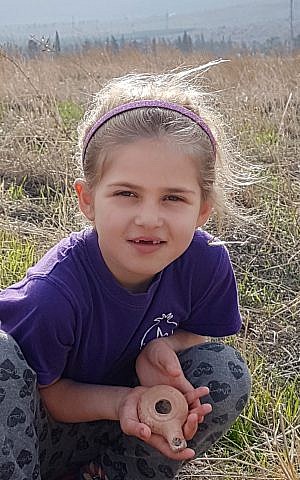 Seven-year-old Hadas Goldberg-Keidar from Kibbutz Heftziba with the intact 2,200-year-old clay lamp next to a porcupines’ cave in the Beit She’an Valley. (Israel Antiquities Authority)

She explained to her daughter that it appeared to be an oil lamp used by ancient people and that they would need to hand it over to researchers at the Israel Antiquity Authorities for study.

“Guessing that this was connected to antiquity theft, I hurried to get in touch with the theft prevention unit at the IAA,” said mother Ayelet.

“Innocent porcupines, digging out their den for the winter, are responsible for the excavation of this intact lamp,” said Distelfeld. Adding a fun fact about the protected wildlife species, he said, “Porcupines prefer archaeological sites because the earth is less packed due to man’s activities in the past.”

Upon receiving the archaeological find from the family, Dr. Einat Ambar-Armon, an expert in clay lamps, dated it to the Hasmonean period.

“The lamp is typical of the Hellenistic period, which began in the 2nd century BCE, the historical period that is known to all of us as the Maccabean Wars against the Greeks,” said Ambar-Armon, the IAA’s regional head of education and community outreach.

During this period, said Ambar-Armon, such lamps were produced from molds: the top and bottom pieces were constructed separately and then connected in a new technique that allowed for their mass production, which she attributes to western-influenced innovation.

You can read more about the development of a the proto-production line in the fascinating article at the link.

Kol hakavod to Ayelet and young Hadas Goldberg-Keidar on their important find and their good citizenship, for which they were awarded a certificate from the Antiquities Authority.

Moving through the centuries back to today, here is some local patriotism to make the headlines ☺.  The biggest Chanukia (Menorah) in Israel was set up in Schneider Children’s Hospital in Petach Tikva – and it is made up of 15,000 balloons! (via Reality who works in Schneider):

Largest Chanukia in Israel in Schneider Children’s Hospital in Petach Tikva – made of 15,000 balloons!

Here is a rough translation of the article:

The Chanukiah, probably the largest in israel, was put up at the initiative of the Tikva U’Marpe [Hope and Healing] organization which works in the pediatric nephrology department and “Asaf  Balloons”.  The Chanukiah is amde up of 15,000 balloons, is 40 meters high and 35 meters wide. It was designed and engineered by the artist “Asaf Balloons” and carried out by volunteers from Tikva U’Marpe, and with the assistance of snapplers from Sport Attraction.

The children of the hospital and their families enjoyed having their photos taken next to the giant Chanukiah.

What a beautiful idea to surprise and entertain sick children, and to celebrate Chanukah at the same time. Kol hakavod to Tikva U’Marpe and all the volunteers who helped bring this giant Chanukiah into being for the enjoyment of these sick children.

And one more inspirational item for Shabbat Chanukah. Here is a fantastic video, via Aish.com (via my cousin Faigie): Charlie Harary explains how we Jews fight darkness with light:

The second part of the video was extraordinarily inspirational in my opinion. I hope you think so too.

And on this inspirational note I wish you all Shabbat Shalom, Chodesh tov for the coming week, and Chanukah Same’ach!