It’s not been an easy week in Israel, so it’s with a sigh of relief that I present you with this week’s Good News Friday installment.

Let’s start with a wonderfully heartwarming story of Kyra Warrell, a little girl from England who flew all the way to Israel to have an operation to save her leg, after the local doctors could only offer an amputation to “fix” her problem. The Jewish Chronicle has been following Kyra’s story from the beginning as they picked up the crowd-funding campaign to raise money to pay for the operation in Israel:

Kyra Warrell with her mum Rima

Kyra is six years old, bright, joyful and mischievous. Like any other little girl her age, she loves playing energetically with her friends. She is facing the prospect of having her left leg amputated above the knee, due to a deformity she’s had since birth.

Kyra has Proximal Focal Femoral Deficiency (PFFD), a rare condition affecting fewer than 1 in 50,000 children in the world. This means she has a deformed hip, a shortened left thigh and unstable knee and ankle. As her left leg is so much shorter, she needs to wear a bulky and heavy prosthetic to help her walk, which causes her a lot of pain.

As she gets older, the deformity will become more pronounced, meaning that her prosthetic will be more difficult to manage, and will lead to complications with her hips and spine.

Dr Dror Paley, world-renowned orthopaedic surgeon of the Paley Institute in Florida, is the most experienced limb lengthening and deformity correction surgeon in the world. He is an authority in his field, with decades of experience lengthening legs like Kyra’s, with a well-resourced team supporting him. Dr Paley has told us that not only can he lengthen Kyra’s leg, but that she will have a full range of motion – with no future complications – by the age of 16.

Kyra will need a series of lengthening operations over 10 years, but the first step is to correct her hip and ankle in February 2018.

The very good news is that most of the money was raised in time, helped along dramatically by the social media campaign of Sussex Friends of Israel, whereupon the family travelled to Israel where Kyra had the operation in Rambam hospital, where she recovered very well.

“The operation was a success, and Kyra will be ready next year for the first of two or three leg-lengthening surgeries which will give her a full range of motion by the time she is 16,” says Dr. Dror Paley, a specialist in treating proximal focal femoral deficiency.

The condition, which Kyra has suffered from since birth, would leave her left leg more than 20cm shorter than her right if left untreated.

Her mother, Rima, said Kyra would remain in a cast from her stomach to her ankle for the next few days.

“She is sleeping a lot at the moment,” said Mrs Warrell. “She is on an epidural to control her pain, so the challenge will be how she feels tomorrow when it’s removed and she is moved on to just paracetamol for pain control.”

She added that Kyra had expressed an interest in visiting the hospital’s pancake stand and was to looking forward to celebrating her birthday on Wednesday. Sadly there is no chance of a cake with candles, which the hospital prohibits for health and safety reasons.

The Warrells were accompanied during their stay by local English-speaking volunteers who heard about Kyra on social media. One stocked their fridge in their rented flat before they arrived, another sat with them during the hours of the long operation. They arranged a birthday party for Kyra and took the Warrells out for meals. And I am proud to say that I played my own little part when I met the Warrells at the airport on Tuesday before they left to help them with getting a wheelchair, getting them through security and generally being a translator.

Kyra is now safely back home recovering, and the Warrells had only good things to say about Israel:

Kyra Warrell, the six-year-old who underwent pioneering surgery in Haifa to save her leg, has returned home to Britain as her parents praised the care she received in Israel.

Kyra having her first breakfast back home in Brighton

Her father, Neil Warrell, said medics at the Rambam Hospital had done everything possible to help the family before they flew back to Brighton on Tuesday.

The Warrells, who are not Jewish, said they were also overwhelmed by the kindness of the Israeli public.

Strangers stocked their fridge, took them out for meals and threw a birthday party for Kyra last week.

Rima Warrell, her mother, said: “We had a lovely last few days in Israel, entertained by people we met through Twitter who opened up their homes to us and took us sightseeing in Tel Aviv.

“We said a teary goodbye to these people. We will be friends for life.”

The story is not over for Kyra. She has more operations in store down the line, and the fund-raising will continue:

Mrs Warrell is already planning a new round of fundraising for Kyra’s first leg-lengthening surgery in Florida, where the family will have to relocate next year for three months of daily post-op physiotherapy.

I’m sure you all ion me in wishing Kyra refuah shlema – a complete and speedy recovery.

On a rather similar theme, an Israeli biotech company has succeeded in growing bones in the laboratory!

Haifa-based biotech company Bonus BioGroup has entered the second trial of a clinical study seeking to regrow bones in a lab. The first trial, which began four years ago and comprised 32 patients, was completed successfully, according to Dr. Shai Meretzki, CEO and founder of Bonus BioGroup. 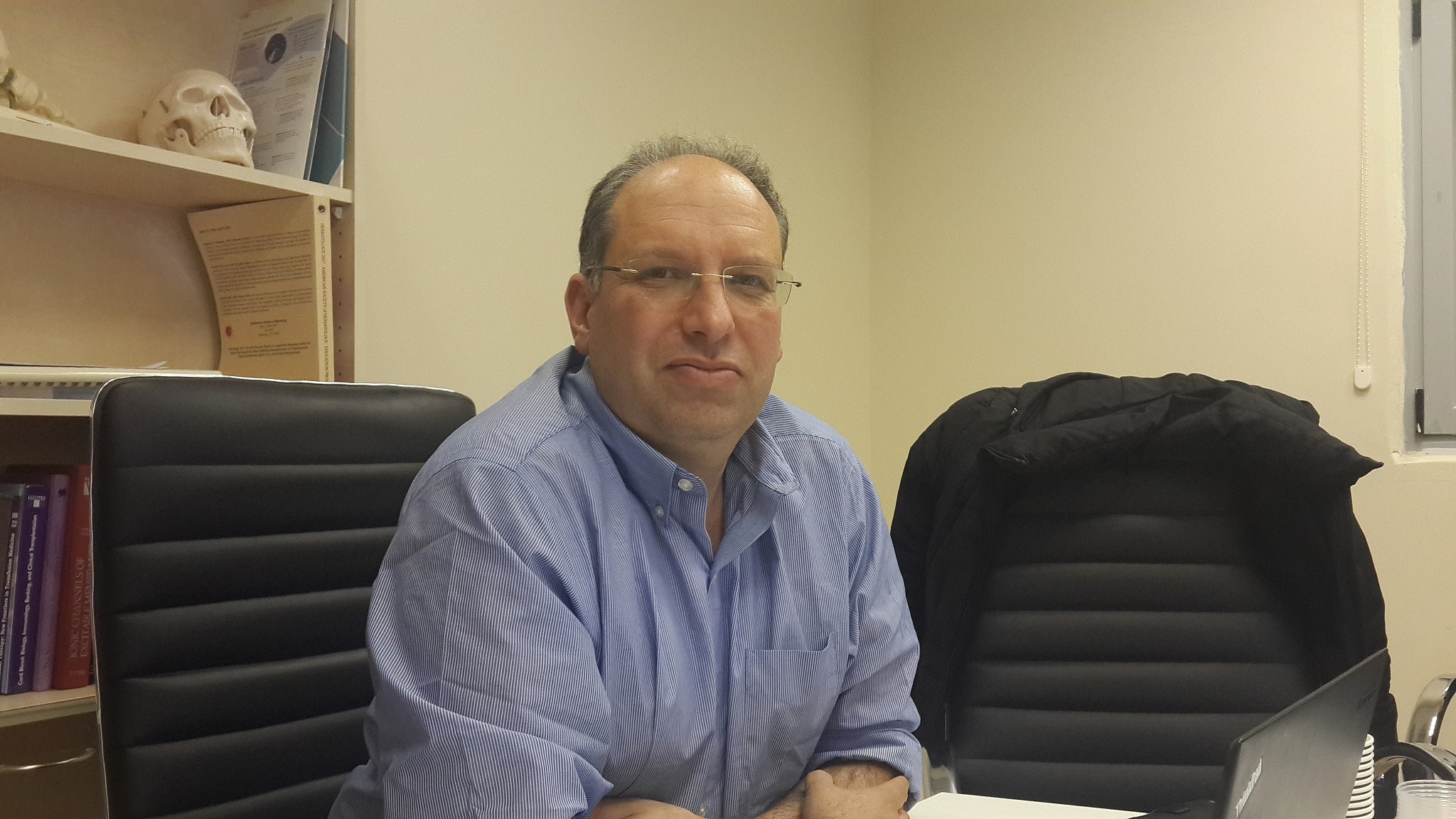 The process they have designed could come out of an an H.G. Wells novel. Liposuction is used to retrieve fat cells from the body, from which damage-controlling cells are isolated. The isolated cells are then grown in a bioreactor, a man-made simulation of the human body. After two weeks, the new bone, tailored to the patient’s needs, is injected back inside of the patient in the form of thousands of tiny, living bone particles called BonoFill.

According to Meretzki, the new bone is very much alive. It can be strengthened, and it can grow along with the patient, a particular point of interest when it comes to regenerating children’s bones. Elderly patients, as well as patients suffering from osteoporosis, infections, cancer, or trauma accidents, could find themselves with new bones up to seven times stronger than an original bone. Cleft palates, currently treated with a series of surgeries spanning over years, could be healed in infancy. 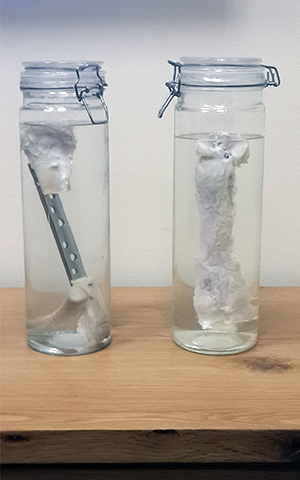 In addition, Meretzki estimates that the procedure, if and when it is adopted by hospitals, will cost less than the current bone regrowth treatment, which can cost up to $90,000.

The new developments are being spearheaded by Meretzki, along with Prof. Ephraim Tzur, scientific adviser of Bonus Biogroup, and Prof. Nimrod Rozen, head of the orthopedic ward of Haemek Hospital.

Just imagine the implications of this dramatic new development! Maybe it could even help children like little Kyra who are born with deformed limbs.

Kol hakavod to Dr. Shai Meretzki and his research team at Bonus BioGroup. May their research produce great success, for the benefit of everyone.

Another biotech development is the recycling of “bad apples” (literally!) into a superfood:

Israeli scientists have found a way to repurpose unwanted and damaged apples that would otherwise go to waste into a “superfood powder” aimed at being a healthier alternative to sugar and a nutritional supplement.

Dr. Ofir Benjamin from Tel Chai Academic College and Professor Raffi Stern from MIGAL – Galilee Research Institute of the Galilee Development Authority in northern Israel produced a powder from second- and third-rate apples that is freeze-dried and to which small amounts of milk powder is added to prevent crystallization, the Tazpit Pres Service (TPS) first reported this week in a Jewish Press article.

Dr. Benjamin told the news service that the two embarked on the research in an effort to find a solution to the huge amounts of apples that are discarded every year in Israel for not meeting market standards, whether due to appearance, or falling to the ground before ripening. The waste is estimated at some 15,000 metric tons, or about 10 percent of the country’s annual yield, according to the report, which amounts to over NIS 25 million in lost income every year.

The powder has 600mg of vitamin C per 100 grams, has no food coloring or preservatives and is rich in antioxidants and nutritional fiber, according to the researchers. It is intended as a healthy sweetener for soft drinks and a supplement.

“The powder can be integrated into many food products and enrich their nutritional values, give them a refreshing apple flavor and turn them into a superfood,” Dr. Benjamin told TPS.

With the new discovery, he said, “now apple growers will be able to take advantage of fruit that otherwise would have gone to waste.”

The scientists are set to present their findings at an agricultural conference hosted by the Galilee Development Authority next week.

What a brilliant idea, ingenious in its simplicity (at least it seems simple to me!). Kol hakavod to Dr. Benjamin and Prof. Stern on their discovery and initiative. Let’s hope it becomes marketable very quickly.

And with all this “food for thought” I wish you all Chodesh tov, a happy and joyous month as we enter Adar, of which it is said “when Adar begins we increase our joy”:

Shabbat Shalom to everyone!