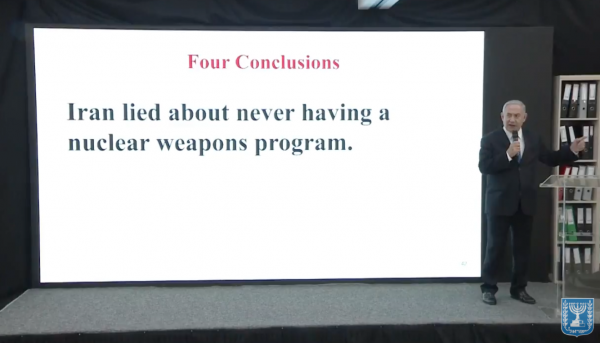 Yesterday (Monday) Binyamin Netanyahu gave advance notice that he was going to make a speech to the nation the same evening.  I admit I was a bit unnerved: I wasn’t sure if he was going to announce his resignation or declare war on Iran. In the end it was neither of those things.

In a dramatic speech, first in English and then in Hebrew, accompanied by slides and PowerPoint presentations, he disclosed a massive haul of half a ton (!) of 55,000 documents and hundreds of CDs stolen from Iran by the Mossad, which reveal the depth of Iranian lies and deceit about their nuclear program.

The Jewish Press (via Arlene Kushner) summarises the speech thus:

The prime minister methodically displayed photos, blueprints, spreadsheets, outlines — in short, a comprehensive program called Project Amad that ran from 1999 to 2003. The material was secretly stored, to be used at a time of Iran’s choosing, to build nuclear weapons, said Netanyahu. “These files conclusively prove that Iran is brazenly lying when it says it never had a nuclear weapons program,” he said. “The files prove that.” He added that the United States has vouched for the authenticity of the secret archive obtained by Israel, and that it will make the documents available to the UN International Atomic Energy Agency (IAEA) and other countries.

According to documents seen in the archive, the goal of Project Amad was to build five warheads, each with 10-kiloton TNT yield for integration on a ballistic missile. Five elements were involved in the project: testing, simulations, building warheads, centrifuge enrichment of uranium and yellowcake production.

There are, the prime minister said, four conclusions that one can draw from the wealth of material brought out from Iran:

The general assumption is that the speech was aimed mainly at “an audience of one”: President Trump:

You can watch the speech below. As some wit noted on Twitter, one would hope that the Mossad operation was more efficient than the tech people who couldn’t manage to get Netanyahu’s microphone operating correctly at the start of his speech!

Legal Insurrection provides us with some highlights of the speech in tweets:

Whatever you think of @netanyahu the level of intelligence the Mossad has gathered, analyzed and concluded on the Iranian nuclear program is mind blowing.

"You don't put thousands of centrifuges under a mountain to develop medical isotopes," you do that if it's for weapons, Netanyahu says.

Ubelievable achievement for Mossad. It got it hands on half ton of original documents and cds from Iran nuclear weapons archives. Lets call NuclearIranleaks. The materials conformed and substantiate all the past suspicions and accusations that if did develop military program

After this breath-taking, dramatic bombshell, it was infuriating to read that the co-chair of the European Council on Foreign Relations pooh-poohed Netanyahu’s news, saying there was nothing new there (via Benjy P):

Nothing really new in @netanyahu Iran speech. Confirms that Iran closed down nuclear weapons program in 2003. Continued technology efforts. In principle all of this well known. No allegation that Iran cheats on 2015 nuclear deal. https://t.co/IJElnZ3JmM

Vijeta Uniyal at Legal Insurrection reports that other members of the EU also dismissed Netanyahu’s claims, persisting in standing by the nuclear deal:

The EU foreign policy chief Federica Mogherini dismissed the intelligence findings, claiming the deal was “based on concrete commitments, verification mechanisms and a very strict monitoring of facts.” She defended Iran’s conduct, saying, UN nuclear watchdog IAEA has “published 10 reports, certifying that Iran has fully complied with its commitments.”

Mitigating this European bone-headedness somewhat, both Germany and France gave vague support to Israel while still not agreeing to withdraw from the deal. Business is business after all:

In an uncharacteristic move, Germany contradicted the EU foreign policy chief by agreeing with Israeli intelligence assessment that the agreement had failed to contain Iran’s nuclear ambitions. Chancellor Angela Merkel’s new-found flexibility on the issue could have something to do with her Oval Office meeting with President Trump on Friday.

“Israel’s scoop offers a chance for a better Iran deal,” the headline in the German daily DIE WELT said. “For years, Iran has shamelessly lied about its nuclear program. The Israeli revelations are a welcome opportunity to renegotiate the nuclear agreement.” The newspaper, however, dismissed the idea of killing the deal, saying, “Pulling out would be self-defeating.” Praising the Israeli intelligence Mossad, the newspaper wrote:

One thing is for sure: the operation by the Mossad, to smuggle out 50,000 documents belonging to the Iranian regime on its nuclear program, should make it into the annals of history of the Western intelligence agencies. It is a spectacular and daring mission–even for an agency known for its high-stake operations in order to secure the existence of Israel. [Translation by the author]

Largely thanks to President Trump’s diplomatic efforts, France has diluted its support for the Iran deal as well. Earlier this week, President Macron said he favored a “new deal” with Iran. However, the multi-billion trade agreements secured by French companies in Iranian oil and gas sector in the wake of the nuclear deal makes it unlikely for the French government to back any harsh US sanctions or actions against the Islamic regime. France, much like Germany, would prefer some additional safeguards than a complete US withdrawal from the agreement.

Given these reports I admit I was rather surprised to read this analysis from Judah Ari Gross at the Times of Israel (via Benjy P), in which he states that Mossad’s amazing feat overshadows the actual value of the intel it stole:

While revealing a truly impressive intelligence coup by the Mossad, Prime Minister Benjamin Netanyahu on Monday night did not present evidence that Iran had violated the 2015 nuclear deal, nor did the material shed dramatically new light on the Islamic Republic’s pre-agreement atomic program.

The alleged location of a warehouse in southern Tehran where Iran kept documents on its nuclear weapons program, until Israel’s Mossad stole them. (Google Earth)

Indeed, as Netanyahu noted, Iranian officials lie when they say their country never planned to manufacture nuclear weapons and put them on ballistic missiles. They did, and probably still do.

But the information proving their deception, while perhaps not widely known, was well-documented and made publicly available in its entirety — not by Israel, but by the International Atomic Energy Agency watchdog — back in 2011.

The details about Iran’s AMAD nuclear weapons program, the identity of project leader Mohsen Fakhrizadeh, Tehran’s plans to put a nuclear warhead on a Shahab-3 ballistic missile, the suspicion that efforts to create an atomic bomb continued after AMAD was formally shuttered in 2003 — all “revealed” by Netanyahu on Monday night — can be found in the heavily footnoted IAEA report from nearly seven years ago.

The main difference, perhaps, is that the IAEA’s 25-page, abbreviation-filled document lacks the panache of Netanyahu’s exhibition.

“We didn’t really get any new information [from Netanyahu] per se,” said Emily Landau, a senior researcher at the influential Institute for National Security Studies think tank and a staunch critic of the Iran nuclear deal.

However, it’s unclear if the prime minister’s intention was to reveal new secrets or whether his dramatic presentation was more of a public relations effort, a reminder of Iran’s duplicity meant to influence US President Donald Trump, who next month will decide the fate of the nuclear deal.

Gross’s view clarifies somewhat the irritating European reaction and puts the speech into some perspective.

Another view was expressed by one of my readers, DavidinPT, who wrote about the sub-text to Bibi’s speech on my previous post:

1. Message 1 to Iran, we know EVERYTHING there is to know about your nuclear program, including the weak, vulnerable spots in your underground bunkers, eg: the necessary air intakes.
2. Message 2 to Iran – We have demonstrated we have the munitions that can destroy these bunkers.
3. Message 3 to Iran – We possess the required determination and courage to deal with you.
4. Message 4 to Iran – We will continue to “provoke” you in Syria, and any counter attack by you will lead to attacks on your soil – see Message No 1 above.
5. Message to EU and Russia, if you don’t get onside with Trump, we now have means and intelligence to attack Iran, and have made the necessary political decision. If you oppose Trump, expect us to make sure you are dragged into a full scale regional war, that will threaten your oil supplies and cause hyperinflation.
6. Message to Trump – Israel is doing its bit, now you do yours.
7. Message to Israeli Police and Attorney General – Leave me alone while I deal with this, there is no-one else who has the experience and gravitas to handle this situation internationally.
8. Message to Coalition Partners – This is the Great Game. Do not waste political energies on “small” squabbles.
9. Message to Saudi Arabia. We are fighting your fight. Don’t side track us with Palestinian peace initiatives now, which are just wasteful diversions.

I guess we will find out the effect of Bibi’s speech, if any, on May 12th when Donald Trump decides whether to withdraw or fix the nuclear deal.

Meanwhile we can take huge pride in the efficiency and effectiveness of the Mossad and appreciate their application of the long arm of Israeli law across thousands of miles and a continent. Kol hakavod!