We’ve already had a surfeit of good news this week, from Donald Trump’s announcement of the withdrawal from the JCPOA to the widespread international support for Israel in its defensive actions against Iranian aggression.

Tomorrow night Israel will be marking Yom Yerushalayim (Jerusalem Day), the 51st Hebrew anniversary of the Six Day War victory with the reunification of Jerusalem and the liberation of Judea, Samaria and Gaza. There will be festive prayer services around the country and many celebrations in Jerusalem itself.

By happy coincidence, or maybe by Divine intervention, this Hebrew anniversary coincides almost exactly with the civil anniversary of Israel’s founding 70 years ago. This date falls the day after Yom Yerushalayim, on May 14th, and this auspicious date will be marked with the official opening of the US Embassy in Jerusalem. 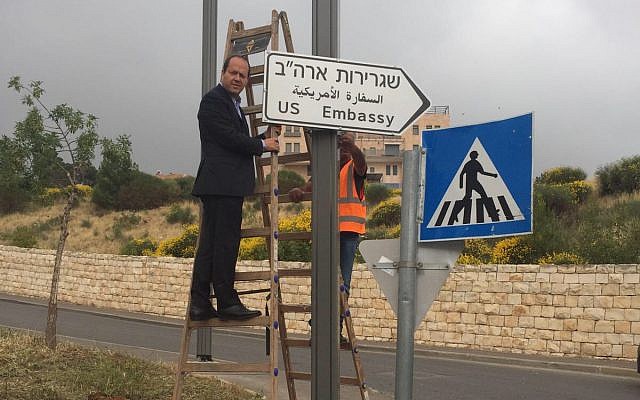 You can’t keep a good man down: Jerusalem Mayor Nir Barkat fixes the new sign to the US Embassy in Jerusalem

The announcement of the US moving its embassy to Jerusalem seemed to open a floodgate for other countries to follow suit. Guatemala, Honduras and Paraguay will be opening their embassies in Jerusalem, together with the Czech Republic.

Shortly after the United States officially moves its embassy from Tel Aviv to Jerusalem on Monday, it will be joined by Guatemala and Paraguay. Both countries are planning to make the move this month, and Honduras may be next: Its Congress recently passed a resolution urging its foreign ministry to move its embassy.

Along with the Czech Republic, whose president said last month it will begin the process of moving its embassy to Jerusalem, these countries belong to a small club (albeit one with a superpower).

While some of their reasons are less savory, there are other very good reasons for them to want to move their embassies:

But it’s not all about Trump. The three countries have ties to Israel that date back to its founding.

“Most Latin American countries are relatively young, and they were very much captivated by Israel’s story, a young country beating the odds after destruction in the Holocaust, and trying to make it in a very hostile environment,” Vann said.

Guatemala and its UN ambassador Jorge Garcia Granados played a crucial role in the adoption of the UN partition plan for Palestine in 1947, which recommended creating a Jewish and an Arab state in pre-state Israel. In 1948, Guatemala became the first in Latin America to recognize Israel, setting off a domino effect in the region.

Following Israel’s establishment, the country focused on achieving international recognition of Jerusalem as its capital, said Jonathan Grossman, a postdoctoral research fellow at the Institute for Israel Studies at the University of Texas at Austin. He has researched ties between Israel and Latin America.

“Latin America was a major target in this struggle because they were mostly very friendly toward Israel,” Grossman said.

In this vein I feel it fitting to close this week’s post with this beautiful video (which I may well have posted before).  The very popular and talented singer Yaakov Shweky sings Im Eshkachech Yerushalayim (if I forget thee O Jerusalem):

If I forget thee O Jerusalem, may my right hand lose its cunning; may my tongue cleave to my palate if I do not put Jerusalem above all my joys”.

Shabbat shalom to you all and Yom Yerushalayim same’ach!