The injustice of the destruction of Netiv HaAvot

I have refrained from writing about the evacuation expulsion of Jewish residents of Netiv Ha’avot because the injustice of it all so upset me that I could not put together a coherent post (this is why I’m only a blogger and not a journalist). I waited until commentators more eloquent than me wrote about it, and I bring you their commentary here. 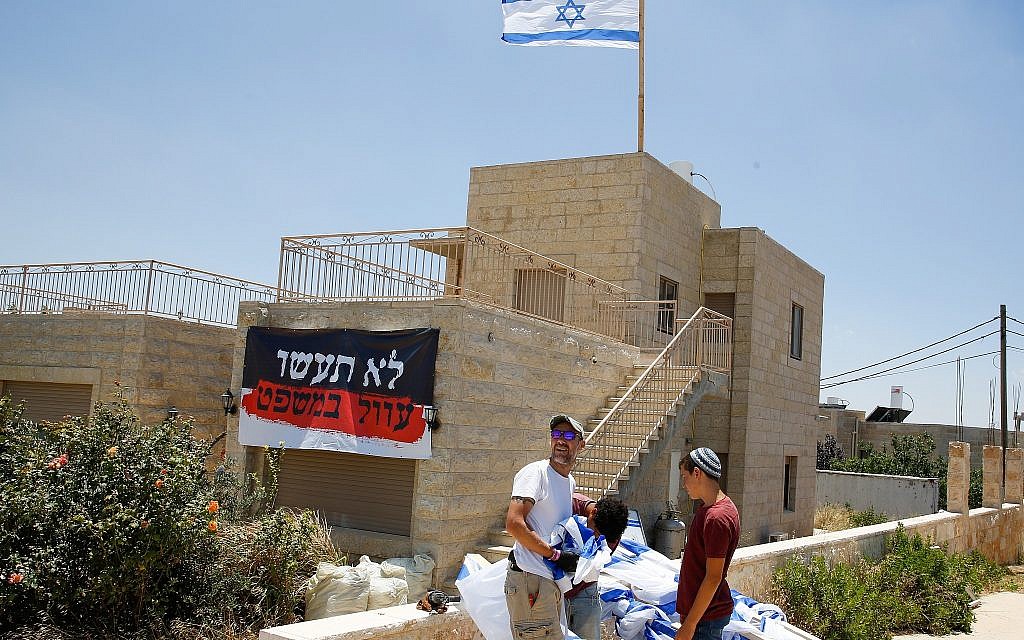 A house slated for demolition in Netiv Ha’Avot

Just some background: Netiv Ha’Avot (lit: The Path of the Patriarchs) is a very small neighbourhood in an almost equally small town in Judea (aka a settlement) – called Elazar (where coincidentally my daughter used to live). Elazar is within Gush Etzion, the Etzion Bloc which was overrun in 1948 by Arabs (who magically became “Palestinians” in 1964) and whose residents were either taken into Jordanian captivity or were slaughtered in the most brutal fashion. Gush Etzion was reclaimed by its Jewish owners in 1967 after the victory of the Six Day War.

So what happened in Elazar? Regavim have produced a very good short video explaining the legalities – or should I say the perversion of legalities which underlie this forced evacuation:

The Yeshiva World brings us the story and videos from yesterday’s heart-breaking evacuation as they happened:

The morning began with thousands turning out for the last Shachris in the Netiv HaAvot neighborhood of Yishuv Elazar in Gush Etzion. Fifteen homes are being destroyed and the families evicted, once again as a result of a decision by Israel’s High Court of Justice.

An estimated 6,000 people were on hand, including Ministers Naftali Bennet and Ayelet Shaked as well as Deputy Minister Eli Ben-Dahan and MK Shuli Muallem for a last shachris on the site. Also present were a number of prominent rabbonim including HaGaon HaRav Chaim Druckman Shlita, and of course, local and regional leaders. 2500 Police officers were dispatched to maintain order.

Gush Etzion Regional Council head Yochai Damari said, “Last night I was also there at the protest rally on the destruction of the houses that are expected to take place there today. You cannot remain silent in the face of the injustice that cries out to heaven!

“The destruction is unnecessary and painful and annoying after it was possible to reach the arrangement of the few meters in which there was ostensible deviation from state land [and what is claimed to be Arab land] and thus prevent the destruction of the homes of the families.

In the video we hear the song from Tehillim which has become synonymous with eviction of Jews, as this was the pained song chanted during the eviction from Gush Katif.

Justice Minister Ayelet Shaked (who despite her esteemed position could not persuade the judges of their error) said the evacuation was a huge mistake:

“This stems from a serious mistake: It began with a mistaken state response that was given a few years ago, this was corrected. It ends with a mistaken ruling by the Supreme Court. The news is that this is where it ends. In the last three years, we have changed the discourse: Instead of asking ‘when do we evict?’, today we ask ‘how do we regulate?’” said Shaked. 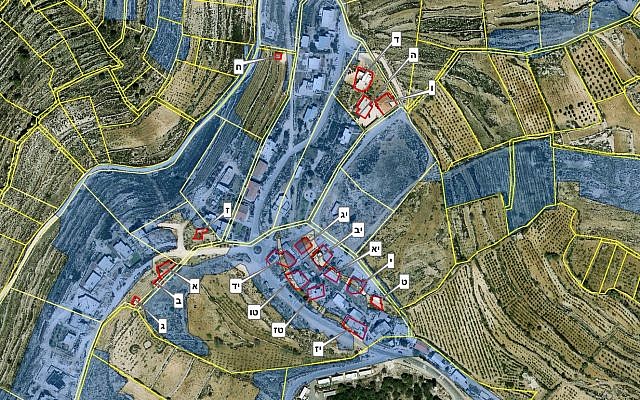 An aerial view of Netiv Ha’Avot

“For every home that is demolished, we build dozens of new homes. Tomorrow we will inaugurate the new neighborhood here, and we are now in the process of approving hundreds of housing units. From here we are all going to say to the extreme leftist organizations: Thank you. You are helping to build the communities in Judea and Samaria,” she continued.

“From this destruction we are going to build and promote the construction of hundreds of housing units – this is our message from this day,” concluded Shaked.

Indeed, this time the evacuees of Netiv Ha’Avot may have a point that they will be back, bigger and stronger:

Recognizing that it could not save the homes affected by the High Court ruling, the cabinet in February approved a proposal to begin the process of legalizing the rest of Netiv Ha’avot. The residents plan on utilizing the authorization of an official building plan to advance the construction of 350 more homes in the neighborhood.

“For every home that will be demolished, we will build 30 more in its place,” said Hay proudly.

A group of seven Palestinians have claimed ownership of the land on which Netiv Ha’avot was established in 2001, insisting that they were expelled by Israeli settlers. It was their petition that led to the High Court decision ordering the razing.

The Peace Now settlement watchdog has backed the Palestinian petitioners, asserting in a Monday statement that the demolition will demonstrate that “anyone who builds on land without authorization or even purchasing it first will ultimately be compelled to leave.”

The left-wing NGO called on the government to allow the Palestinians to return to their farms.

But Hay claimed that the land adjacent to Elazar had been unworked until the turn of the 21st century. “The community was established in light of the Arab attempt to seize the land,” he said. “It was an ideological decision on our part.”

The only small compensation that differentiates this evacuation from other larger ones is this:

The state has built a temporary neighborhood on an adjacent hilltop for the 15 Netiv Ha’avot families, who are expected to live there for the next 2-3 years while permanent homes are rebuilt on the original hilltop where the community was founded.

At least the residents will not be pushed from pillar to post while the authorities belatedly try to find where to house the evacuees, leaving them refugees in their own land.

An interesting analysis in JNS by Alex Traiman explains why destruction of Jewish homes will not bring peace:

Demolishing the homes does not return the property to Palestinian owners. In many demolitions, such as those in the Jewish communities of Beit El, Ofra and now Elazar, the demolished homes were all within the security perimeters of large Jewish communities. In cases of entire community demolitions, like the northern Samaria communities of Homesh and Sa Nur, which were curiously attached to former Israeli Prime Minister Ariel Sharon’s Gaza withdrawal plan in 2005; and small caravan community demolitions like Migron in 2012 and Amona earlier this year, the evacuated properties became closed military zones.

In other words, the houses get demolished, but Arabs are not granted any access to the territory. And in each of the cases, most of the evacuated Jewish residents were resettled, either within the very same communities or in new communities constructed in the West Bank. In the most recent cases, the government, which opposes the Supreme Court rulings while admitting it has no choice but to adhere to them, has given generous compensation to the expelled communities and has pledged to build thousands of new units to bolster local settlements.

The evacuations and demolitions, while painful to the nation, have not diminished the spirit or the size of the Jewish settlement enterprise. While some residents of Judea and Samaria move to the territories on purely ideological grounds, most enjoy the affordable, suburban lifestyle, with sprawling parks, high-quality schools and close proximity to large Israeli population centers. Elazar is merely a 10-minute drive from Jerusalem.

“In the end, this neighborhood will be fully recognized by the government and more homes will be built here in Gush Etzion, so in the long-term Peace Now’s actions will have the opposite effect of their goals.”

Meanwhile, members of the international community will be celebrating the demolitions, which further weaken Israel’s standing within that community. Each time a demolition takes place, it creates more pressure on Israel to withdraw from territories.

As can plainly be seen from the withdrawal and expulsion of 8,000 Jewish residents from the large Gush Katif settlement block in what is today Palestinian Gaza, the withdrawal did not lead towards peaceful coexistence. To the contrary, the economic situation of Gazans diminished as employment opportunities within the Jewish communities disappeared, Hamas took over security control in areas vacated by the IDF, and thousands of rockets were fired at Israel.

Gazan residents who have been trying to breach the border with Israel, are doing so in part, because the quality of life on the Jewish side of the border is exponentially higher than on the now Judenrein, Palestinian side of the border. Radical Palestinians and members of the international community who seek for Israel to continue withdrawing from territories now want to make the region of Judea, home to Netiv Ha’avot, Judenrein as well.

The best-case scenario is that the demolitions in Netiv Ha’avot will have little to no effect on Israel moving forward. In the worst-case scenario, the evacuations will drive peace further away.

This is plain common sense. What a shame that the Supreme Court doesn’t seem to possess any.

2 Responses to The injustice of the destruction of Netiv HaAvot