For the many not the few? Or not the Jew? Labour’s resident antisemitic members Jeremy Corbyn, Shami Shakrabarti, Ken Livingstone and Jackie Walker

The Labour Party under Jeremy Corbyn has gone and done it again. Not content with alienating most of its Jewish constituents with its persistent antisemitic scandals, it has now redefined the very definition of antisemitism to permit Nazi comparisons, to exclude anti-Israel prejudice, accusations of Jewish dual loyalty and much more. In this way, it can proudly declare that it is free of antisemitism! Look! It says so in our constitution!

The Campaign Against Antisemitism (CAA) reports:

While claiming to have adopted the International Definition of Antisemitism, Labour has in fact butchered it by removing four of the manifestations of antisemitism that it cites, namely:

The significance of this cannot be overstated. The four examples that have been removed by the Labour Party are central to the understanding of post-Holocaust antisemitism and the antisemitism of  the far-left that now has the Labour Party in its grip. It is driven by the pro-Corbyn faction’s obsessive hatred of the Jewish state, and seems to be designed to give free rein to certain forms of antisemitic discourse that have no place in a liberal democratic society.

One of the most sickening aspects of this disgusting perversion of the internationally accepted definition of antisemitism is the underhanded way in which Labour persuaded the Jewish Labour Movement (JLM) to go along with the change:

A letter signed by Luciana Berger MP and Ivor Caplin, the Parliamentary and National Chairs of the Jewish Labour Movement (JLM), and addressed to Jennie Formby, the current General Secretary of the Labour Party, reveals the extent of Labour’s duplicity. The letter alleges that the meeting at which the code of conduct was adopted took place without the JLM having sight of any of the documents discussed, that the JLM’s offers to participate in order to ensure transparency were repeatedly rejected, and that JLM representatives were left waiting in Ms Formby’s office lobby, only being allowed in to give evidence.

Outrage against this redefiniton of antisemitism, which was done solely in order to whitewash the real antisemites in the party so that Labour can claim it is not antisemitic, was roundly condemned across the board.

Nick Cohen, the Guardian’s resident center-left Jew (though he is not actually Jewish), wonders why Labour is risking alienating progressive Jews:

To see how deep the rot has penetrated, imagine a racist police force – it isn’t hard to do. Imagine a chief constable had endorsed fantasists who say black men are natural criminals and Muslim men are paedophiles. Imagine, to the relief of everyone who thought the police should fight crime rather than race wars, the chief constable announces that there is “no place for racism in my force”. If the chief constable then wrote his own definition of racism and drew its terms so tightly that hardly any officer fell within it, no one would find his conversion convincing.

Rather than building a popular front to fight Trump and Brexit, Labour has taken it upon itself to reject the International Holocaust Remembrance Alliance’s definition of antisemitism. Don’t panic, the alliance isn’t a Jewish conspiracy. It states that “criticism of Israel similar to that levelled against any other country cannot be regarded as antisemitic”. Its working definition is accepted by thousands of public bodies. But not the British Labour party.

…Recently departed Labour staffers describe as a “political project” the party’s decision to make Jews the only ethnic minority Labour denies the right to define the racism they face. Dissident leftists are already providing examples of the anti-Jewish hatred the new guidelines might allow.

… all conspiracies go back to Jews in the end. Antisemitism isn’t like other racisms. There’s almost a note of envy in it.

Whenever you raise leftwing racism, Labour activists accuse you of repeating Tory smears. You reply that politicians always smear their opponents: what matters is whether the accusation is true. They say: “Jeremy’s words have been taken out of context.” You show they have not. They say: “But what about right-wing Islamophobia?” You reply that a true anti-racist would fight both. That used to silence them. But now they will be able to produce the conclusive rejoinder that Labour has investigated and found to its relief and delight that antisemites barely exist.

Here is a series of tweets expressing the contempt which greeted Labour’s attempt to “Goysplain” antisemitism – i.e. a non-Jew explaining to a Jew what antisemitism really is:

JLC and @BoardofDeputies respond to the new guidelines on antisemitism published by the Labour Party https://t.co/GFGWxnWRo6 pic.twitter.com/m96BxkdML9

Black people define what is racist towards black people. The same goes for every ethnic group. LP refusing to accord the same respect to Jewish people is a good example of how Corbyn has turned the LP into a party that finds anti-Jewish racism the "acceptable" , aproved racism.

“Accusing Jewish citizens of being more loyal to Israel, or to the alleged priorities of Jews worldwide, than to the interests of their own nations”@jeremycorbyn & @JennieGenSec pic.twitter.com/ym1VsajnTO

I’ve written to the General Secretary of @UKLabour about our apparent failure to adopt the IHRA definition in full. It is not too late for the Party to avoid making this catastrophic mistake. pic.twitter.com/QCO3Qm0L7y

You have to see this. I don't want to be the only sane person who's seen it.
It's Labour. It's the supporters of Jeremy Corbyn.
It's not a one-off.
This night is no different from all other nights. pic.twitter.com/K42qlrN7D8

British Jewry have a new leader to represent them in the Board of Deputies, Marie Van Der Zyl, who is adamant that she will continue fighting the endemic antisemitism in Labour:

Her tone may be a little softer than that of her feisty predecessor, Jonathan Arkush, but the Board’s new president nonetheless shows a steely determination not to let Corbyn off the hook.

“We need to see action, not words from Jeremy Corbyn and the Labour party,” she argues. 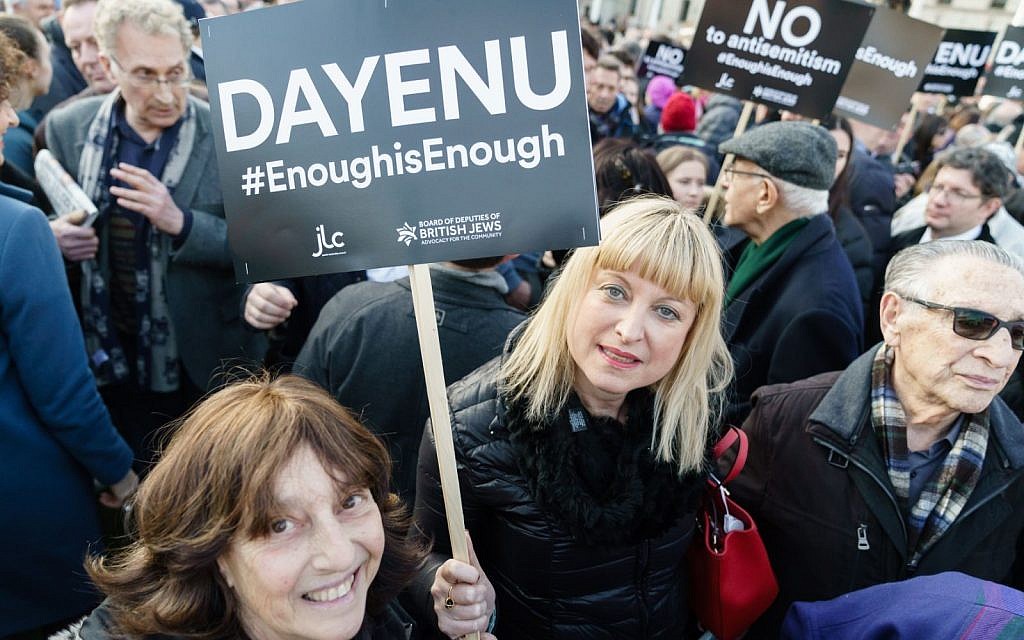 Referring to the main slogan of the Jewish community’s unprecedented demonstration against systemic anti-Semitism outside the parliament building this past March, van der Zyl continues: “Enough is enough. We meant that.” 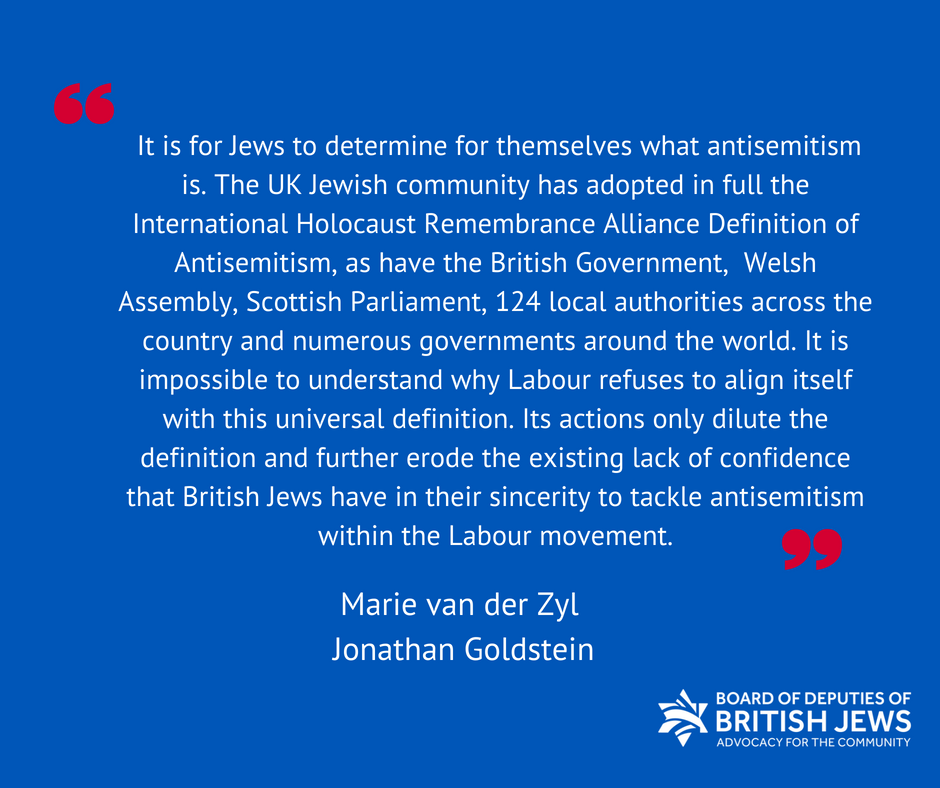 Later this month, van der Zyl and Jonathan Goldstein, chair of the Jewish Leadership Council, are expected to meet with Corbyn to follow up the “disappointing” session the communal organizations held with the Labour leader in April.

“We have made a series of suggestions to Labour, and that represents the minimum — and that’s the absolute minimum — standards that we would expect,” she suggests.

Already, however, Labour seems to be falling well short of these demands.

For the sake of the British Jewish community I hope that Ms. Van Der Zyl can carry through on her pledges.

As for the Labour Party under Jeremy Corbyn, why any Jew would still vote for them or support them is beyond me. They have made it plain that Jews are not welcome unless they are “good Jews” who will condemn Israel and give support to terrorists.

It is a terrifying thought that Jeremy Corbyn is one general election away from No. 10.