Guest Post: The trouble with Labour under Corbyn – an open letter to sympathetic non-Jewish friends

Since I wrote my post a couple of weeks ago about the anger aroused by Jeremy Corbyn’s refusal to adopt the full version of the IHRA definition of antisemitism, matters have become even more heated. The level of anger, not only in the Jewish community, but amongst Labour top officials as well as rank-and-file members finally led Jeremy Corbyn to issue an apology.

However, true to his narcissistic character, the apology was a non-apology, and even worse, it was published on Shabbat when observant Jews are offline and don’t see the newspapers for 24 hours. The Jewish community largely rejected the apology (in the above link):

“Until Corbyn can honestly and fully own up to the problematic nature of some of his own past actions, he will struggle to lead the cultural change that is needed to clear the decks of a loud minority within Labour who behave in this way.

“At the moment, a continuing refusal to do what is necessary just proves how badly Jeremy Corbyn is failing to tackle the world’s longest hate. He should remember that inaction in the face of racism is complicity.”

Earlier, the Board of Deputies of British Jews and the Jewish Leadership Council had criticised the Labour leader’s “ill-timed and ill-conceived” article for the Guardian published on Saturday, the sabbath and therefore traditionally a day of rest.

Just look at the headlines sparked by the “apology”:

These are some of the headlines in the weekend British press that @jeremycorbyn will be waking up to. And we haven’t even started with the Sunday morning TV shows! #LabourAntisemitism

Brian Goldfarb noted that ironically, after Corbyn posted his article on his own Facebook page, it was flooded with antisemitic comments, which are not being removed, as the Campaign Against Antisemitism notes. The antisemitism in Labour has become so deeply entrenched that not even an apology (however weak) from the Leader himself can deter the Jew-haters.

The situation is that bad that even Labour Deputy Leader Tom Watson is calling for corrective action:

… that the party will “disappear into a vortex of eternal shame and embarrassment” and render itself unfit for government, unless it calls an immediate halt to damaging arguments over antisemitism.

Speaking to the Observer, Watson called on Jeremy Corbyn to drop without delay internal inquiries into two Labour MPs – Margaret Hodge and Ian Austin – who both lost family members in the Holocaust and now face possible disciplinary charges after furious outbursts over the party’s stance on antisemitism.

Watson also said Corbyn should immediately adopt the full International Holocaust Remembrance Alliance (IHRA) definition of antisemitism, along with all its examples – a move the party continues to resist – in order to prevent the row engulfing the party throughout the entire summer period.

Listen also to the editor of the Jewish News in his interview on Sky News, as he explains what is wrong with Corbyn’s apology:

It is against this background that Brian Goldfarb wrote his open letter to bemused non-Jewish friends.

This is a guest post by frequent contributor and commenter Brian Goldfarb. Brian lives in England and was a long-time Labour voter, until the rise of Jeremy Corbyn and his Momentum clique of antisemites. As such Brian can give us a deeper insight into the view of the average British Jew of the fiasco that is Labour under the leadership of Jeremy Corbyn, than we, sitting in Israel, can really understand.

This is a letter I wrote to two different sets of non-Jewish friends, the one set who had written us an email having read Jonathan Freedland in The Guardian essentially wondering out loud how the hell this happened, given the Labour Party’s long and, until now, honourable fight against racism in all its forms. The other set lunched with us in our small garden, and, as it always does with them, the subject of Israel and other matters Jewish came up, in no way critically, other than against Labour under Corbyn.

Let me start, not with Corbyn, but with the IHRA definition of antisemitism, the adoption of a severely amended version of which has caused all the trouble. It is important to note that the overwhelming majority of Labour MPs voted (with 4 exceptions and without Corbyn & Co present) for the adoption of this definition of antisemitism in full. Further, the Labour Party LGBT section has followed suit, as have at least some of the affiliated organisations – including some trade unions. They are in good company: the UK and many other Western governments have also adopted this in full, as have the Metropolitan Police. as well as other police forces.

So, that’s the good  news. And even some of Corbyn’s inner circle are calling for him to back off and get it right.

So, why won’t he, when even Shadow Chancellor John McDonnell is telling him to?

This is where it gets murky: is Corbyn an antisemite? If he isn’t, why does he act as he does, refusing to see that his refusal to accept the IHRA definition in full is immediately suspect.

Labour, for the Many, not the Jew

In the late 19th century, a German Social Democrat, August Bebel, came up with a memorable phrase: “antisemitism is the socialism of fools”. By this he meant that the acceptance of the myth of Jewish control of the money markets, industry, capital in general – and therefore, it would follow, get rid of that control, and you can reorganise the world in a much more equitable way. It never occurs to such people that if that were true, how come Jews were unable to stop antisemitic laws and practices, the Holocaust even, if they control the world.

In Corbyn’s case, it gets even more complicated: once Jews got their own state, and, even worse, succeeded in protecting it with an overwhelming victory in 1967, Israel became somehow part of the neo-colonialist Western world holding down the innocent and exploited Palestinians.

I am, of course, biased, but a careful reading of the Charters of Hamas, Hezbollah (condemned as terrorist organisations by most Western governments) and the PLO/Fatah will show clauses calling for the destruction of Israel and the death of Jews everywhere.

Corbyn has proclaimed that Hamas and Hezbollah are his “friends”: is it any surprise that his use of language is careless towards Jews?

My final specific point is that at a meeting called by our local Labour MP on the rise of the Far Right in England (where it is most noticeable), I asked a quasi-question: I used the first of the excluded sections of the IHRA definition, which argues that it is antisemitic to accuse Jews of being more concerned with Israel and/or Jews elsewhere in the world than with Britain: dual loyalty – with the implication that this is therefore a failing of a more sophisticated version of the “Tebbitt test”. I asked how would people feel if we substitute Afro-Caribbean (or Black British), or Asian or Moslem (or even Catholic) and substitute an appropriate other country or countries? The reaction would be obvious: this would be racist. So why not when directed towards Jews?

I have no doubt that our Labour MP (Catherine West) is one of the good people: our Rabbi seems to think so.

You might find the following article helpful to understand how my wife and I feel: The seven questions left unanswered by Jeremy Corbyn’s apology which include:

As a PS to readers of this site, today’s (5 August, 2018) Observer (remember, it’s the companion to The Guardian) has some fascinating articles: first up (on pp 1 & 4) is this article (quoted above by Anne) by the Deputy Leader of the Labour Party, Tom Watson, arguing that if that Labour doesn’t get it’s act together, it faces “eternal shame over antisemitism”; then, on pp 26, 27 & 28 , Toby Helm, the Political Editor, has the following: Antisemitism: Corbyn and the crisis that will not go away; and also a comment piece by Fiona Miller, former aide to Cherie Blair, where  she concludes her column as follows:

“After seeing my tweet last week, many people contacted me in private and public to say they had already quit. One old friend and fellow education campaigner observed: “If you are thinking like that, you have left already.”

If your political home is where your heart is, that may well be true.”

You will need to read the article to discover what her tweet was.

And there is more in just that issue. For instance, I noted but did not click onto an article by the great Nick Cohen, always worth reading.

I would also note that I have commented frequently here about the response of parts of the UK Left on Israel’s temerity in successfully defending itself, especially in 1967, from its enemies. Corbyn, sadly, exemplifies exactly these symptoms.

First, As an extra PS, the good news, just out tonight (Monday night) is that Labour has decided to drop the investigation into Margaret Hodge for the “crime” of accusing Corbyn of antisemitism (!).  Labour slyly claimed that Hodge had apologized, but her lawyer’s letter – a masterpiece of British legalese – firmly puts paid to that suggestion. 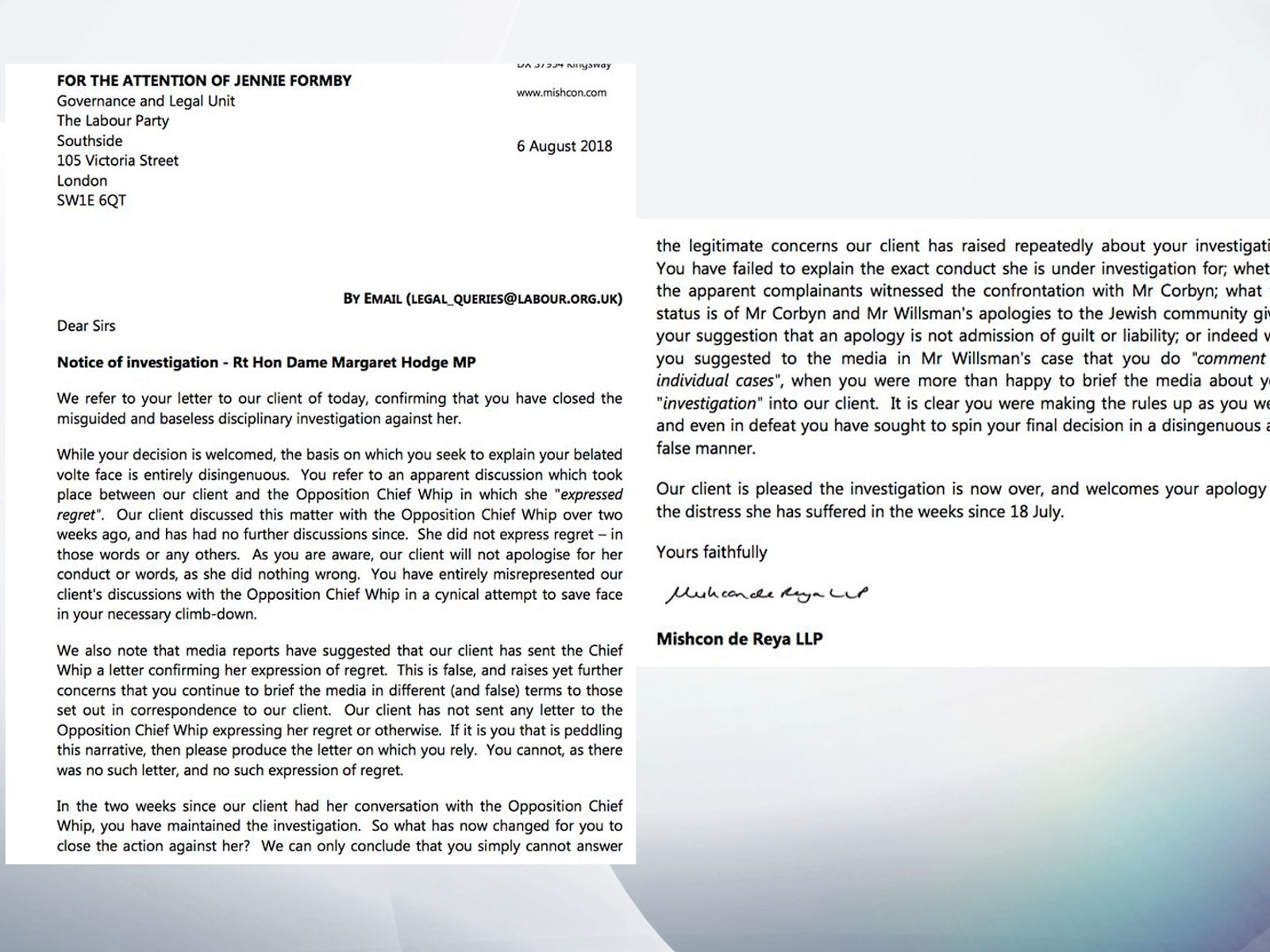 This is the response to the letter I received from the Labour party earlier this evening. To be clear again; no apologies – on either side. pic.twitter.com/zDogfyk9LV

Brian, thank you as always for giving us your insights into the problems facing not only British Jews, but Britain as a whole. For if Jeremy Corbyn should (G-d forbid) become Prime Minister he will be a disaster for the entire country, with his Leninist (or is it Trotskyite) economic policies and a foreign policy stuck in the 1950s.

For more on what motivates Jeremy Corbyn, see my next post in the next day or two. Stay tuned.

6 Responses to Guest Post: The trouble with Labour under Corbyn – an open letter to sympathetic non-Jewish friends