What is Corbyn’s problem with antisemitism?

By now no one can doubt that the Labour Party has become institutionally antisemitic, even if many individual members are not, and are in fact supportive of the Jews and even Israel. But the stink comes from the head as they say in Hebrew, and that position is occupied by Jeremy Corbyn.

Why is it so hard for him to understand antisemitism when it is staring him in the face? Why can he not fathom that prejudice against Israel is in fact anti-Jewish prejudice. No, a Jew cannot be held responsible for Israel’s actions, but the corollary is not true. If you bash Israel it is as if you bash the Jews too.

Why does Corbyn have a soft spot for antisemites even if he is genuinely horrified to be called one himself? Why does he have an obsession with Israel and the Palestinians when as Labour leader he should be devoting himself to the collapsing economy and taking advantage of Theresa May’s shaky premiership as Brexit explodes all around her?

The answer in short:  He is a Stalinist stuck in the 1970s. Watch this short video which pretty sums up his character:

Confirming this view of Corbyn as a man stuck in the 1960s, without having moved on in his political positions, here is Henry Zeffman in the Times (h/t BP), saying that Corbyn has led Labour into a nightmare of his own making (might be behind a paywall). Emphases are mine:

How did it come to this? How did the Labour Party become a pariah organisation for mainstream British Jews? And where does the vexed matter of Israel, a 70-year-old state roughly the size of Wales, come into it?

To understand how Mr Corbyn, an unimpeachable anti-racist in many respects, ended up in a position where Britain’s Jews distrust him on the seemingly straightforward question of hatred of Jews, we need to go back to 20th-century Europe. Zionism, or the movement for the establishment of a Jewish state, was given fresh impetus by the horrors of the Holocaust. But Theodor Herzl, the “spiritual father of the Jewish state” died long before the war, in 1904. Even after he convened the first Zionist congress in 1897, there were significant non-Zionist strands to Jewish thinking.

… The Second World War, and the subsequent establishment of the state of Israel, changed the nature of the debate. “Before 1939 anti-Zionism was a position in debates among Jewish opponents of antisemitism,” writes the sociologist David Hirsh. “After 1948 it became a programme for the destruction of an actually existing nation state.”

At the time the Labour left was on the Zionists’ side. Perhaps the only man lionised more by Mr Corbyn’s fans on social media than Mr Corbyn himself is Nye Bevan, the conscience of Attlee’s New Jerusalem and the architect of the NHS. Bevan in fact considered quitting the Attlee government because he deemed it insufficiently supportive of Israel and the Zionist cause. … “The general sentiment on the left at the time was sympathy for Zionist aspirations and the construction of socialism in Palestine,” summarises Colin Shindler, a professor of Israel studies at Soas in London.

But on Israel Mr Corbyn is less Bevanite and more a child of the Sixties. “Anti-colonial struggles gained momentum,” Professor Shindler writes, at the same time as “Palestinian nationalism began to coalesce and emerge from the shadows”. Throw into the mix the 1967 Six Day War, the subsequent Israeli occupations of the West Bank and Gaza, plus an emerging internationalist, cultural liberalism across the West, and the milieu from which contemporary anti-Zionism — and at its fringes contemporary antisemitism — emerged becomes clearer. Mr Corbyn turned 18 in 1967, and was already engaged in left-wing causes. He had joined the Campaign for Nuclear Disarmament (CND) the previous year.

The case of the mural, however, shows that British Jews’ misgivings over Mr Corbyn are not confined to his possible associations with antisemites who might have attached themselves to pro-Palestinian activism.

The article describes the antisemitic mural about which Jeremy Corbyn made a sympathetic comment back in 2012. As for the apology he made:

provoked fury from the main Jewish community groups and triggered a protest in Parliament Square attended by hundreds of distraught Jews, many of whom had clearly never been moved to attend a protest before. Under pressure to make a firmer statement, Mr Corbyn announced: “I sincerely regret that I did not look more closely at the image I was commenting on,” an excuse that was widely mocked, and in some quarters simply disbelieved.

The antisemitic mural which Corbyn defended in 2012

Zeffert then turns to the abridged version of the IHRA definition of antisemitism which was adopted by Labour last month:

One of the tweaked examples was comparisons between contemporary Israeli policies and those of the Nazis. It took on fresh pertinence this week when The Times revealed that in 2010 — on Holocaust Memorial Day, no less — Mr Corbyn had hosted an event in the Commons, the animating thesis of which was that the Israeli government behaved like Nazis. …

What has baffled Labour insiders, though, is Mr Corbyn’s apparent trouble in offering a fuller apology that acknowledges the scale of the hurt he has caused the Jewish community. Labour staffers privately admit that they are fed up with having to defend his past decisions.

John McDonnell, the shadow chancellor, has strikingly demonstrated an alternative approach to Mr Corbyn’s this week. Increased antisemitic violence, defacement of Jewish cemeteries and the amount of security required at Jewish schools. Jon Lansman, the founder of the pro-Corbyn activist group Momentum, has adopted a similar stance. Raised in a Jewish household in north London, he was once beaten up by skinheads when walking home from synagogue, where he had been preparing for his bar mitzvah. “I know what it’s about,” he says of antisemitism.

Perhaps there is a cynical edge to Mr McDonnell’s comments — “John wants to be chancellor and this is an impediment to him becoming chancellor so he has to shut it down”, one ally says — but even some champions of Mr Corbyn wish he would show similar pragmatism. For that they blame Seumas Milne, Labour’s communications chief, who joined the leader’s office in 2015 from The Guardian where he was one of Britain’s leading anti-imperialist and anti-Israel voices. (A New Statesman profile of Mr Milne quoted a contemporary at Balliol College, Oxford, recalling him spending his years there “wearing a Mao jacket and talking with a fake Palestinian accent”, and pushing anti-Israel motions in the student common room.) [Read this link about Milne’s Communist credentials] 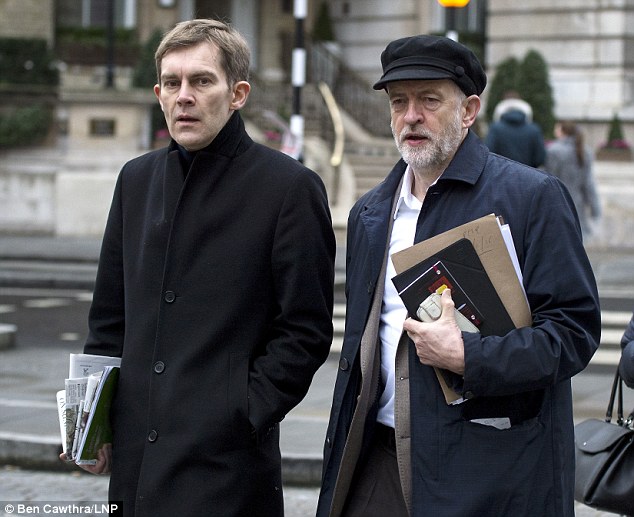 But the IHRA definition is something of a sideshow to the fundamental and irreconcilable problem. Corbynism sees Zionism as a symptom of the ills in the world. Plenty of proponents of that view insist, no doubt honestly, that they bear no ill feeling to Jews themselves. But the bulk of British Jews see it differently. As Mr Lansman himself has said, the “vast majority of British Jews are supportive of Israel as a Jewish state”. (He also claimed that Mr Corbyn was too — he has done a poor job of convincing Jews.).

However Mr Corbyn tries to proceed, there is a simple question being asked in varying forms in Jewish households across Britain. Would the Labour leader have allowed relations with any other minority to spiral to such an unfathomably low point? The majority of Britain’s Jews appear to be reaching a clear, and desperate, conclusion.

The big question now facing Labour members, whether Jewish or not, is what is the next step. Should they oust Corbyn (if that is even feasible)? And if so, will anything change given that the hard-left Momentum grassroots movement still dominates the party’s policies. Furthermore, if Seamus Milne remains a powerful voice in the party, you can be sure that nothing will change, certainly not for the better.

2 Responses to What is Corbyn’s problem with antisemitism?