Posted on 7 September 2018 by anneinpt

It’s almost Rosh Hashana (starting Sunday night), so this is the last Good News Friday post of the Jewish year.

It is therefore fitting that my first item should be about pomegranates, the fruit that most symbolizes Rosh Hashana, for its round shape, its sweetness and the multitude of seeds which represent the 613 mitzvot that the Jewish people are commanded to keep.

Pomegranates, it turns out, are not only beautiful and tasty, but extremely healthy too. Here are 5 reasons why they are the crown jewels of fruit:

Pomegranates may very well be the world’s most healthy fruits. These nutrient-rich ruby red orbs are bursting with vitamins, antioxidants, and minerals.

“Pomegranates have an amazing amount of Vitamin C, about a third of the recommended daily amount, and the fruit’s red-colored flesh contains high levels of antioxidants. As such, pomegranates have been shown to have anti-tumor properties and help ward off cancer, support a healthy heart, and lower blood pressure,” Yael Inbar, a health coach in Tel Aviv, tells NoCamels. …

… A natural source of energy, pomegranates are so powerful that this fruit – which also boasts a rich source of potassium, folic acid, and fiber – has been found to pack three times the antioxidant levels of red wine or green tea.

Israeli scientists recently announced that pomegranate juice could reduce the risk of premature birth and brain damage to fetuses.

Pomegranate juice has long been an item on pregnancy meal plans. Researchers from Rambam Health Care Campus and the Technion – Israel Institute of Technology are now giving two more reasons why this is so.

“Studies have shown that pomegranates are rich in polyphenols (a type of free-radical-neutralizing compounds), known to have strong antioxidant and anti-inflammatory effects that help protect against cardiovascular disease,” says Ron Beloosesky, Director of the Prenatal Ultrasound Unit in the Division of Obstetrics & Gynecology at Rambam.

“Because we know some causes of brain damage in fetuses are related to inflammatory processes, we thought to test if drinking pomegranate juice could help prevent infection and inflammation in the mother and thus reduce the risk of damaging the fetus.”

“Although this is a preliminary study, the results are very interesting,” says Beloosesky. “It seems that an accessible and inexpensive juice that can be found in any supermarket has a positive effect on a serious problem that harms mothers and their embryos.”

The pomegranate is bursting with symbolism and, depending on which culture or tradition being cited offers good luck, prosperity, eternal life, knowledge, and fertility.

It may just be the most sanctified fruit.

Actually, the pomegranate has serious weight in Judaism. It is mentioned numerous times in Jewish texts with reference to fruitfulness and love. Some scholars say it was the pomegranate – not an apple – that tempted Eve in the Garden of Eden; the 12 spies are said to have brought a pomegranate back to Moses to show the “fertility” of the Land of Canaan; and it is often said that pomegranates have 613 seeds, to correspond with the 613 commandments in the Bible.

Pomegranates are a natural aphrodisiac

With so many cultures designating the pomegranate as a symbol of fertility, it is no surprise that this crimson, juicy fruit is also cited as one of the fruit world’s natural aphrodisiacs. …

Pomegranates are fun to eat

The internet is filled with articles and videos on ways to eat pomegranates. Whether you prefer getting your hands dirty or hitting the skin of the fruit with a wooden spoon, the important thing is to enjoy the fruit.

It is fun to poke out the jewel-like seeds or scoop them straight into your mouth.

Chewing pomegranate seeds is a mouthwatering adventure every time: break the fruit sac covering the seed with your teeth to release the sweet and tangy juice.

Since we’re on this subject you might be interested to learn about the Rimon Winery, the only winery in the world that makes pure pomegranate wine (not liqueur). They are located in Dalton near Tsfat where we spent our recent holiday, and we went on a tour. Afterwards we had a tasting session. That was absolutely yummy!  Not surprising since they have won many international prizes.

Our tasting session was rather alcoholic too!  😀  Luckily we were staying less than a 5 minute drive from the winery. I highly recommend their wines and other products.  I bought a few bottles of wine from them and am looking forward to sharing them with our friends on Rosh Hashana.

Spinal cord injury causes permanent changes, with symptoms that can include loss of muscle function, strength and sensation, as well as loss of other body functions supported by the spine. Chances of complete recovery are slim and the process is long and difficult, even with aggressive rehabilitation and especially if treatment isn’t immediate.

A new study published in the Journal of Neurotrauma in July by researchers at Tel Aviv University claims that a prompt, uncomplicated treatment may be the simplest, quickest way to deal with a spinal cord injury and diminish symptoms such as inflammation and scarring.

The treatment involves the injection of a potent enzyme into the spinal cord intravenously, just hours after an incident.

The study was conducted by Dr. Angela Ruban and Dr. Yona Goldshmit from TAU’s Sackler Faculty of Medicine. Goldshmit is also an adjunct research fellow at the Australian Regenerative Medicine Institute at Monash University in Melbourne.

An X-ray of the spine

The main idea, Dr. Goldshmit says, is to block the body’s natural reaction to spinal cord injury, by reducing the secondary damage as soon as possible.

“Primary mechanical damage to spinal cord tissue kills a certain amount of neuronal cells. But there’s secondary damage due to the release of excess glutamates, which are responsible for additional functional disability,” Dr. Goldshmit said in a press release, “This is the role of the enzyme injection we devised.”

“We realized that injecting the enzyme reduces those temporary high glutamine levels, changing the balance of concentration between brain and blood,” Dr. Ruban tells NoCamels.

The treatment was tested on lab mice and over the course of five days, the animals showed significant recovery from the injury, according to the study.

“The treatment increased the survival of neurons at the lesion site and enabled axonal regeneration into the injury site, which resulted in significant functional recovery compared with the untreated mice,” Ruban said in the university statement. “This indicates that drug intervention with blood glutamate scavengers following spinal cord injury may be neuroprotective and may create a regenerative environment.”

What an incredible discovery! The positive implications of this, if it is successful in humans, are indescribable! How many lives can be saved and improved through this treatment! Kol hakavod to Dr. Angela Ruban and Dr. Yona Goldshmit on their extremely important research. Let us hope it develops into a practical treatment.

And one last item before Shabbat, back to our distant past. 1,020 clay seals were discovered in a cave after lying untouched for 2,000 years:

An enormous trove of 2,000-year-old clay seal impressions was chanced upon in August during exploration of a newly discovered seven-room cave complex at the ancient city of Maresha, part of the Bet Guvrin-Maresha National Park in central Israel. 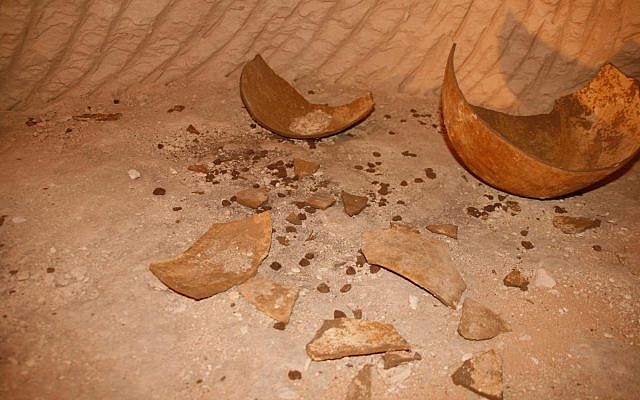 Smashed pottery and dozens of clay sealings found in one of the seven newly discovered rooms of a subterranean complex in the ancient Hellenistic-era city of Maresha, near Beit Guvrin. (Asaf Stern)

In the dark, dank cave, the stash of over 1,000 sealings was nearly invisible to the naked eye. Only after entering the small cave to set up the photography lighting were they spotted, and Asaf rushed out to inform his father, “We have something amazing here!”

The sealings were photographed in situ, and carefully gathered the following day for preservation, storage and analysis.

According to a press release on the find, “These unfired bullae sealed the knots of twine binding papyrus scrolls — hundreds of them — that did not survive their 2,000 years in the caves’ moist atmosphere. The imprint of the string and the impression of the papyrus is still visible on many of the bullae.”

An initial survey of 300 of the 1,020 clay sealings indicates they were strung on documents from a large private archive. The quantity and quality of the new, almost unprecedented hoard of sealings is rare on an international scale, said Stern, who directs the excavation at the site.

“It really underlines the fact that the city was a major cosmopolitan center; an inland city with indelible ties to the outside wold,” Stern told The Times of Israel. The find, he said, “puts Maresha once again on the map.”

Located in Israel’s Shfela region in the foothills of the Judean Mountains, land-locked Maresha, today a recognized UNESCO World Heritage Site, was once a culturally diverse city with a small Jewish population on the crossroads of the Hellenistic empire, said Stern. Mostly dating to the time of the Maccabees, previous “incredibly rich” artifacts discovered at the site come from corners of the empire as far-flung as the Black Sea, he said.

A vibrant part of the Helenistic Empire, the city was conquered by Jews and abandoned in 107 BCE, by the Maccabean King John Hyrcanus I. Roman-era pottery discovered at the site give indications that the cave complex was used by Jews weathering the Bar Kochba Revolt of 132-135 CE.

What a fascinating discovery shining a light on Israel’s fascinating and varied history. Kol hakavod to Drs. Ian and Asaf Stern on their remarkable finding.

And so, with this last Good News Friday post of the year, I wish you all Shabbat Shalom. Stay tuned for my Rosh Hashana post on Sunday.