Posted on 5 September 2018 by anneinpt

The basis of the Palestinians’ grievance against Israel is their claim to their “right of return” to what was once “Palestine”.  Their demand is claimed not only for the original half-million or so refugees of 1948, but – uniquely for any refugees anywhere in the world – for all of their descendants for all time. It is unique also in that no other refugees anywhere in the world have a right of return to their original land.

There is NO “right of return” in international law. If possible within several years, refugees return home. If not, REGARDLESS of why not, local integration and resettlement are EQUALLY legitimate. No refugees, Palestinians included, possess such “right”, so nothing to take away.

This demand has been the stumbling block to any kind of settlement (if you excuse the term) between Israel and the Palestinians, for this “right of return” will, if fulfilled, destroy the State of Israel as the homeland of the Jewish People. In fact, that has been the prime reason for keeping the “refugee” problem alive until this day.

The refugees and their multiple generations of descendants have been supported economically, politically and socially by UNRWA. Again, this is a unique situation. All the other refugees in the entire world are supported by a single UN agency – the UN High Commission for Refugees. Alone among the refugees are the pampered Palestinians who were privileged with their own “private” UN agency.

This absurd situation has perpetuated not only the refugee crisis but the Israel-Palestinian conflict in general – and it would seem that that was the general intention all along.

But finally, with the unlikely figure of Donald Trump in the White House, and the heroic personality of US Ambassador Nikki Haley in the UN, it looks like the tables are beginning to turn.

It all began a few weeks ago, as the BESA Center explains in its article “Is a historic decision on UNRWA imminent?“:

Two weeks ago, Foreign Policy reported that in internal email correspondence, Jared Kushner, US President Donald Trump’s senior adviser and son-in-law, wrote to his colleagues: “It is important to have an honest and sincere effort to disrupt UNRWA. This [agency] perpetuates a status quo, is corrupt, inefficient and does not help peace. Our goal cannot be to keep things stable and as they are… Sometimes you have to strategically risk breaking things in order to get there.” Earlier this year, the US slashed its contribution to UNRWA by half, signaling its growing displeasure with the agency. 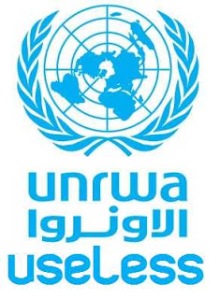 UNRWA was created in 1950 to resettle the 600,000 Palestinians who had been displaced during the Arab-Israeli war of 1948. While the Western powers did in fact do everything they could to help the Palestinians rebuild their lives, the Arab world used UNRWA to perpetuate the problem rather than solve it. For the Arab world and the Palestinians themselves, resettling the refugees would have meant making peace with Israel, and that they were not willing to do. To the Arabs, the State of Israel was a grave disruption of the natural order, and the only remedy could be the repatriation of Palestinian refugees – thus turning Israel into an Arab state.

The US supported UNRWA for decades, even though it knew the agency is a disruptive organ that harms the prospects for peace, keeps the Palestinians locked in a trap of dependency, and threatens Israel’s security. UNRWA lists over 5 million Palestinians as “registered refugees” and has long encouraged them to dream that someday they will resettle in Israel. This falsehood – the most significant obstacle to achieving peace – is a euphemism for the Arab desire to completely undo the State of Israel. The US, along with other Western powers, continued to sustain UNRWA all these years as a means of appeasing the Arab world. UNRWA is thus a relic of the Cold War era.

For the past few decades, the West has treated the Arab-Israeli conflict as a territorial dispute. Since the June 1967 war, the prevailing motto was “land for peace,” which meant that in return for territory, Israel would receive peace from its neighbors. An American decision to withdraw from UNRWA would signify that the US believes the dispute to be not territorial but existential. By addressing the core ethos of the Palestinians – that the entire land is theirs, and therefore all “registered refugees” should be entitled to “return” – the Trump administration could make an invaluable contribution to Israel’s security as well as to the prospects for future peace. Only by dealing directly with the intransigent worldview of the Palestinians, as epitomized by the “refugee” problem and the Palestinians’ demand for the “right of return,” will peace be possible in the future.

This would be the first time the Palestinians pay a price for their intransigence. Up to now, they have been encouraged to harden their position every time they refuse a peace deal offered to them by Israel. When they said no to Ehud Barak’s peace proposal at Camp David in July 2000, they received a better offer from Bill Clinton a few months later. When they refused that offer, they were offered another, still better deal by Ehud Olmert in 2007-2008. They refused that offer as well. The inner logic of the peace process until now was that the Palestinians might as well keep on saying no, since doing so brings them better offers.

If Trump pulls all US funding from UNRWA, he will break this twisted logic. The message will be: If you are going to turn down peace proposals, do not expect better ones to follow. Intransigence breeds less negotiating power, not more.

Following this discussion, last week Nikki Haley declared that “we have to look at the right of return”:

WASHINGTON – US President Donald Trump’s ambassador to the United Nations questioned on Tuesday the credibility of Palestinian claims to a “right of return” to lands in modern-day Israel, touching on one of the most sensitive topics in the Israeli-Palestinian conflict. 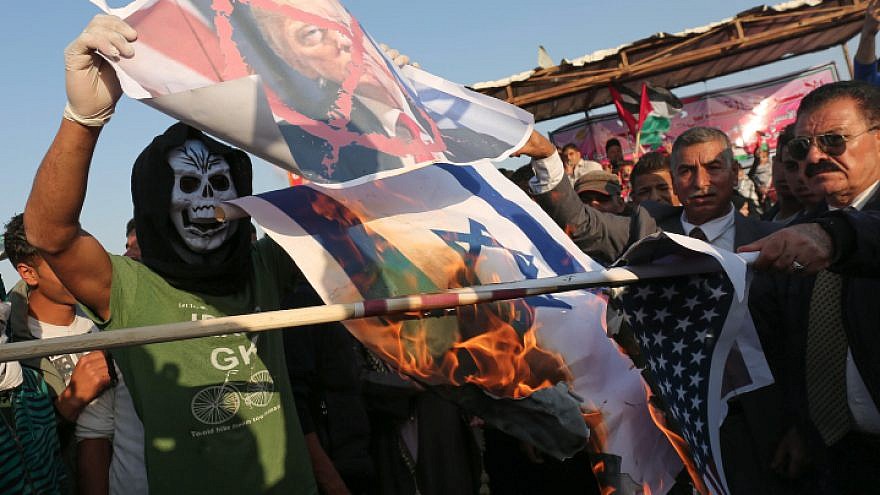 Accepting an honor at the Foundation for Defense of Democracies, Nikki Haley was repeatedly asked by Clifford May, the organization’s president, to comment on reports that the administration will soon target the United Nations Relief and Works Agency, a body which treats the descendants of refugees from 1940s Mandate Palestine as refugees themselves, by cutting the rest of its funding to the body and challenging its qualifications for refugee status. 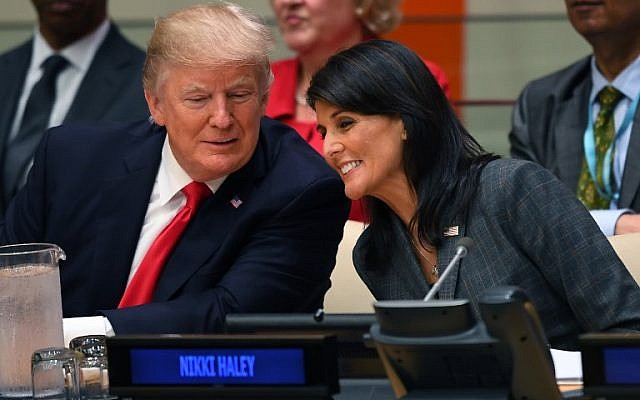 Donald Trump and Nikki Haley at the UN in 2017

The Trump administration has already cut much of its funding to UNRWA, and Haley’s response suggests a complete cut is in the offing.

“You’re looking at the fact that, yes, there’s an endless number of refugees that continue to get assistance,” she said. But she said the issue was “bigger” than that. “The Palestinians continue to bash America,” she said, while “they have their hand out wanting UNRWA money.”

“UNRWA can stay there, and we can be a donor if they reform,” Haley continued, declining to endorse a proposal to wrap UNRWA – a refugee body devoted exclusively to the Palestinian cause – into the United Nations High Commissioner for Refugees, or UNHCR. “We will look back at partnering them.”

She called on specific countries – Saudi Arabia, the United Arab Emirates and Kuwait, among others – to contribute to UNRWA, noting that the US remains its primary benefactor.

“I absolutely think we have to look at right of return,” she added.

Trump administration officials have declined to comment or push back against reports that they will soon roll out their position on a “right of return,” long criticized by the Israeli government as an attempt by Palestinians to undermine the Jewish nature of the state.

The Times of Israel was more definitive in its report on the issue, and says that the US is to reject Palestinian right of return:

According to the Hadashot TV report Saturday, the US in early September will set out its policy on the issue. It will produce a report that says there are actually only some half-a-million Palestinians who should be legitimately considered refugees, and make plain that it rejects the UN designation under which the millions of descendants of the original refugees are also considered refugees. The definition is the basis for the activities of UNRWA, the UN’s Relief and Works Agency for Palestine Refugees. 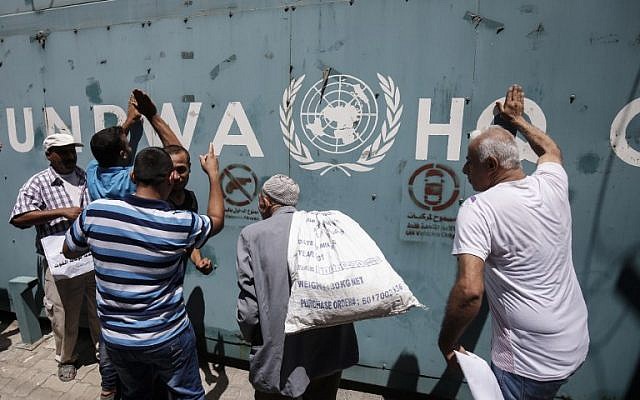 Employees of the UN Relief and Works Agency for Palestine Refugees in the Near East (UNRWA) and their families protest against job cuts announced by the agency outside its offices in Gaza City on July 31, 2018. (AFP PHOTO / SAID KHATIB)

The US — which on Friday announced that it had decided to cut more than $200 million in aid to the Palestinians — and has also cut back its funding for UNRWA — will also ask Israel to “reconsider” the mandate that Israel gives to UNRWA to operate in the West Bank. The goal of such a change, the TV report said, would be to prevent Arab nations from legitimately channeling aid to UNRWA in the West Bank.

UN Watch, in a series of tweets about the above BESA Center report, explains how The US is to decide next month whether to discontinue funding UNRWA:

“The US funds one quarter of UNRWA’s $1.2 billion budget. A complete US withdrawal would be a significant step, signaling for the first time in decades that Washington is willing to touch upon the core issue of the conflict: the question of Israel’s existence within any borders.”
“While the Western powers did in fact do everything they could to help the Palestinians rebuild their lives, the Arab world used UNRWA to perpetuate the problem rather than solve it.”
“For the Arab world and the Palestinians themselves, resettling the refugees would have meant making peace with Israel, and that they were not willing to do.”
“To the Arabs, the State of Israel was a grave disruption of the natural order, and the only remedy could be the repatriation of Palestinian refugees – thus turning Israel into an Arab state.”

“An American decision to stop supporting UNRWA would be an announcement that the US understands that the ‘refugee problem’ is a political disguise for the Palestinians’ real aim, which is to dismantle the State of Israel entirely.“
“Removing this disguise would do a huge service not only to the cause of peace but also to the security and future of the Jewish State.”

The Americans have not shut the door on the Palestinians entirely. Nikki Haley assured that the US will work with UNRWA when the number of refugees is corrected:

She confirmed that the United States had cut the budget to the U.N. Relief and Works Agency (UNRWA), the U.N. agency responsible for Palestinian refugees, by more than 82 percent, adding, “We will be a donor if it [UNRWA] reforms what it does … if they actually change the number of refugees to an accurate account, we will look back at partnering them.”

It will be very interesting indeed to see if UNRWA gets its act together and starts to act as a proper refugee agency, issuing a recount of the number of genuine refugees, and stops acting as a branch of the PLO.

Unfortunately, the Europeans, completely missing the point of the American decision, undid most of the good work that the US is trying to do, by jumping into the breach and assuring UNRWA and the Palestinians that they will pick up on the funding where the US left off. Now the question remains how much can Europe, with its floundering economy, afford to give these pampered non-refugees.

7 Responses to Turning the tables Part II: US Rejecting the Palestinian right of return, defunding UNRWA