The state of Britain today – good for the Jews?

For months now Britain has been roiling in its Brexit woes. Theresa May resigned (or was she pushed?) and the race is now on to choose a new Prime Minister. The internal voting amongst Tory MPs is now over and the choice is down to two men, one of whom will be elected the new Prime Minister by Tory party members. 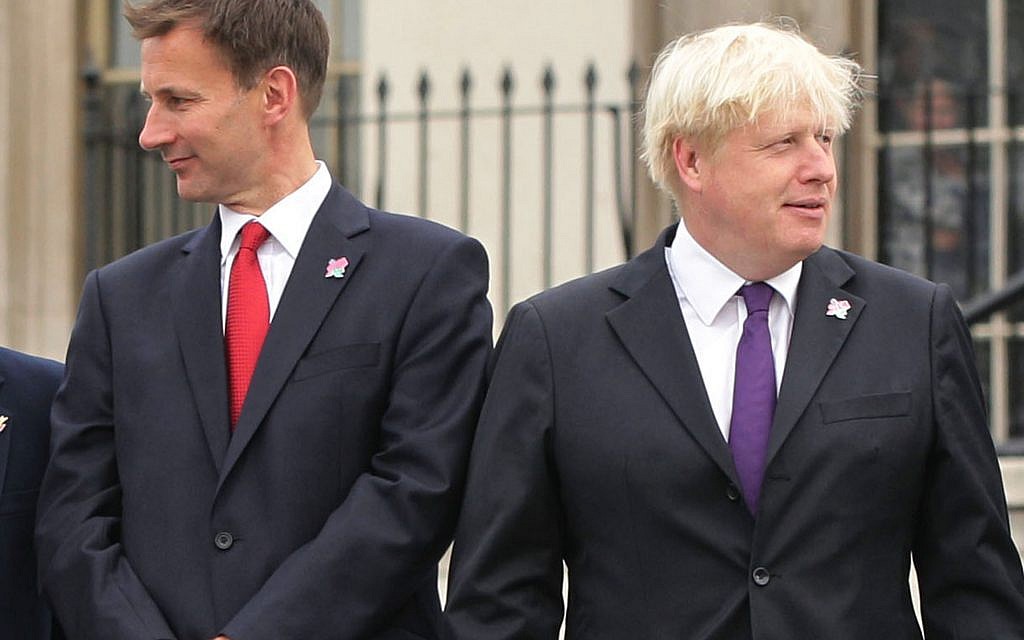 The two men are Boris Johnson and Jeremy Hunt. The Jewish News (via David P) gives us a backgrounder on the two candidates and reassures the Jewish community that both are worthy choices:

Simon Johnson, chief executive of the Jewish Leadership Council, said “Both candidates have shown great support and friendship to the Jewish community. They have both acknowledged how important the Jewish community is to the life of this country. They have taken a strong position on all the issues of importance to us, including speaking up vocally against antisemitism, and in support of religious freedom and the protection of rights.”

Boris and Hunt have a solid record of defending the memory of the Holocaust and speaking out against antisemitism.

At a Conservative Friends of Israel reception in January 2019, Foreign Secretary Hunt emphasised that the UK “will always stand shoulder to shoulder with Israel in stamping out antisemitism”. He talked about the privilege he had of unveiling a statue of British Holocaust hero Frank Foley, stating that “if we don’t learn lessons, history will judge us very poorly indeed”.

As Mayor of London, Boris signed the American Jewish Committee’s antisemitism pledge. In the week of Holocaust Memorial Day 2018, he wrote that “Even today, the truth about the Holocaust is distorted and sometimes denied. The most grotesque comparisons are drawn between Zionism and Nazism, including by public figures who should know better”. And in March 2018, when the community held its first public protest against antisemitism in the Labour party, Boris stated in Parliament that it is “absolutely vital for everybody in this House to send out a very clear message that antisemitism anywhere is intolerable”.

In the BBC leadership debate, Hunt talked about his three half-Chinese children and emphasised the need for Britain to remain “one of the most open, tolerant countries on the planet.” Meanwhile, Johnson has described himself as a “one-man melting pot” – with a combination of Jews, Muslims, and Christians as great-grandparents.

Where do they stand on Israel?

In March 2019, Foreign Secretary Hunt ‘saluted’ the German Bundestag for passing a law which equates the Boycott, Divestment and Sanctions (BDS) movement with antisemitism. Hunt tweeted: “Boycotting Israel – the world’s only Jewish state – is antisemitic.” And last month, when Gaza fired over 700 rockets at Israel, he tweeted that his thoughts were “with the families of innocent civilians killed and affected by Hamas’ indiscriminate and abhorrent rocket attacks.”

Furthermore, in March 2019 Hunt announced that Britain will now oppose every Item 7 resolution on the UNHRC’s agenda, which singles out Israel for debate. However, that doesn’t necessarily mean Britain will oppose all one-sided resolutions that don’t fall under Item 7. At the same meeting, the UK abstained on a report into last year’s violence on the Israel-Gaza border that had been submitted under a separate agenda item.

Meanwhile, Boris describes himself as an ex-kibbutznik, who spent most of his time washing up. At the Centenary celebrations of the Balfour Declaration, he said “I recognise the magic, the genius, and miracle of Israel.”

He has talked about the creation of Israel as being one of the greatest political triumphs of the 20th century, describing it as “a democracy, a liberal society, a beacon of hope and which shares the values in which I passionately believe.”

As Foreign Secretary, Boris condemned the UN Human Rights Council (UNHRC) for its disproportionate focus on Israel, which he said was “damaging to the cause of peace”. And as Mayor, his trade mission to Israel and dismissive remarks about boycotts led to a boycott of him in the West Bank.

However, during the Gaza war, Boris described Israel’s response as “disproportionate, ugly and tragic.” In his book about Churchill, he writes about “the shameful way Israelis have treated Palestinians”, as well as the “generally woeful quality of Palestinian leadership”.

His friend of 30 years, journalist Tom Gross, says that on occasion Boris has “waxed and waned towards Israel”. However, he argues that Boris stood up for the Jewish state at the Oxford Union when he was a student, which was not always a popular thing to do, and as editor of The Spectator he published articles emphasising Israeli victims as well as Palestinian.

Indeed it seems that Britain will be in a safe pair of hands whoever is elected – at least as far as the Jewish community is concerned. What will happen with Brexit is a whole other story, one which I cannot comment upon.

The greatest challenge for the new PM besides Brexit will be to contend with the Labour Party, and specifically with Jeremy Corbyn and his revolting coterie of antisemites who form a huge threat to the Jewish community, to Britain’s relations with Israel, and as importantly, to Britain itself since they are hard-left socialists with a tyrannical communist approach to politics.

I have written numerous times on this blog about the monstrous problem of antisemitism in the Labour Party. The Jewish activist and researcher David Collier has done sterling work in researching the antisemitic activity of hundreds of Labour party members and documenting their online comments on social media and in the press, preserving it for posterity even if they delete their miserable commnets.

Now David has aggregated the worst of these comments and compiled them into fifty-six (56!!) antisemitic conspiracy theories by Labour Party members. David prefaces his article thus:

You are about to enter a twilight zone, a place deep in antisemitic conspiracy. Everyone mentioned has implied that they have been members of the Labour Party. Many explicitly say they joined because of Jeremy Corbyn. Because of the antisemitic nature of these conspiracy theories, ‘Israel, ‘Zionist’ and ‘Jewish’ are used interchangeably.

There will be two images on each conspiracy, the first evidence that the poster is affiliated to the Labour Party, the other an example of the antisemitic conspiracy theory that they shared.

I have created this compilation for a simple reason. Antisemitism is not about what one person says or believes. Antisemitism is a way of seeing the world, an ideology, and the pieces need to be put together for the dangers to be understood properly.

Here is just a sampling of the vile conspiracy theories (click on images to enlarge):

One of the most widespread claims is that Israel did 9/11. I could fill an entire report with images just containing this antisemitic conspiracy theory, however I intend to provide just one example from each of the claims:

To be honest, some of the conspiracy theories are laughable. Though as we have seen, when they are taken seriously by the Corbyn-cultists, the outcome is potentially horrendous:

The Mossad blackmail MPs to get them to defend the indefensible:

Keep on reading through the article, it is almost incredible that this is the face of the British Labour party today.

If you prefer a different format, David has helpfully uploaded these comments into a YouTube video. It is one of the most depressing and alarming things I have seen in a long time.

Let us pray fervently that the people of Britain will use their famed common sense and keep Jeremy Corbyn and his mad cult out of power.

3 Responses to The state of Britain today – good for the Jews?