The Jewish return to Hebron, just after 29th November

Posted on 3 December 2019 by anneinpt

The 29th November, or as it is known in Hebrew “Kaf Tet beNovember”, a very significant date in Israeli history, fell last week.  It was the date of the UN Resolution, Resolution 181, to partition then-Palestine into two states, Israel for the Jews and Palestine for the Arabs. As we all know, the resolution was never implemented because the Arabs rejected it and immediately invaded Israel, resulting in Israeli independence and ignominious defeat for the Arabs. 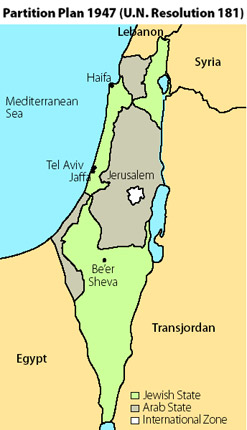 UN resolution 181: The map of partition, 1947, which the Arabs rejected

Despite the Israeli victory both in 1948 (a bitter, partial victory) and the stunning victory in 1967, the Jewish holy city of Hevron, in which the Cave of Machpela (the Cave of the Patriarchs where our Jewish forefathers and foremothers are buried) is located, was made Judenrein already back in 1929 after the horrific Hebron Massacre.

For many years, the small community of 800 Jews in the ancient city of Hebron lived in peace with their tens of thousands of Arab neighbors. But, on the night of August 23, 1929, the tension simmering within this cauldron of nationalities bubbled over, and for a period of three days, Hebron turned into a city of terror and murder as the Arab residents led a rampaging massacre against the bewildered and helpless Jewish community.

By the time the massacre ended, 67 Jews lay dead – their homes and synagogues destroyed – and the few hundred survivors were relocated to Jerusalem.  The aftermath left Hebron barren of Jews for the first time in hundreds of years.

Significantly this sorry situation remained thus for decades, even after 1967:

In 1948, Israel gained its independence from Britain, but Hebron was captured by King Abdullah’s Arab Legion during the War of Independence and ultimately annexed to Jordan.

When Israel finally regained control of the city in 1967, a small number of survivors from the massacre again tried to reclaim their old houses. Defense Minister Moshe Dayan supposedly told the survivors that if they returned, they would be arrested, and that they should be patient while the government worked out a solution to get their houses back.

Years later, settlers moved to parts of Hebron without the permission of the government, but for those massacre survivors still seeking their original homes, that solution never came.

The Jewish community of Hevron have been struggling for decades against the injustice of not receiving proper government permission to build or even reside in Hevron, not even in buildings which were purchased by Jews decades ago, and for which all the relevant papers have been presented.

But just a few days ago – two days after 29th November – we heard  the dramatic announcement by newly appointed Defence Minister Naftali Bennett that he has approved the building of a new Jewish neighbourhood in Hebron!

Defense Minister Naftali Bennett announced the approval of a new Jewish neighborhood in Hebron on Sunday, generating strong praise from the settlement community and condemnation from Palestinian rights organizations.

The neighborhood will be constructed at the site of what is known as the wholesale market, which was purchased by the old Hebron Jewish community at the beginning of the 19th century, but which became a center for Palestinian commerce when the city came under Jordanian rule.

Under the new construction plan, the old market stalls building will be destroyed and several apartment blocks built, which will include as many as 70 units in total, a spokesman for the Jewish community said.

Due to legal requirements, the ground floor of the apartment buildings will be reserved for market stalls, so as to uphold demands of the Supreme Court, although it is unlikely that Palestinian tradesmen will gain access to the old market area due to security considerations.

According to a statement from the Defense Ministry, the construction project will double the number of Jewish residents in the city.

The Jewish community are ecstatic, but of course there are the usual rejectionists and nay-sayers:

The Jewish community in Hebron lauded Bennett’s announcement, saying it thanked him “from the bottom of our hearts” for a decision that “will restore Jewish life to Jewish property in Hebron. Removing the land of those who were murdered from the hands of the murderous mayor of Hebron” is a matter of “historic justice for which the Jewish people had been waiting for 90 years.”

The reference was to the 1929 Hebron massacre in which 67 Jews were murdered, and the land where the new neighborhood is to be built was eventually seized by the Jordanians and used to establish a wholesale market.

The community also thanked Prime Minister Benjamin Netanyahu, former justice minister Ayelet Shaked and former defense minister Avigdor Liberman for their help in bringing about the authorization of the neighborhood.

…
There was also heavy criticism of the initiative, with Peace Now insisting that “it is ethically inadmissible to settle beyond the sovereign borders of one’s state, in an area where one’s own military exercises effective control over a local population and prevents it from acquiring full rights.”

The organization argued that expanding settlements hampers efforts to come to a political agreement with the Palestinians, and therefore “perpetuates Israel’s military rule over the Palestinians at the cost of the latter’s freedom.”

Meretz MK Tamar Zandberg denounced the plan, and described the Jewish community in Hebron as “the capital of apartheid” because of the separation of the Palestinian and Israeli populations in the city.ism,” and that a new neighborhood there would be “a victory for Kahane against Israel,” referring to Meir Kahane, founder of ultra-nationalist political party Kach.

There is no mention by Zandberg of the reason for this separation – because of the murderous nature of some of the Palestinian residents.

Bennet’s announcement didn’t come out of the blue. A year ago the Supreme Court ruled that the market could be transferred to the Jewish community. Since Bennet was appointed Defence Minister 2 weeks ago, Hevron’s Jewish community urged him to approve the rebuilding of the neighbourhood – with the desired result:

A year ago, the Supreme Court ruled that Hevron market land could be transferred from the Arab Hevron municipality to the city’s Jewish community but nothing has been done to advance the project yet although the land is desperately needed for new housing. The market was built on land which belonged to Hevron’s Jewish community before the community was destroyed in the 1929 Hevron Massacre.

Now we have to wait to see if this new approval will be implemented on the ground. It’s a good start – let’s hope it is carried through to the finish. It’s about time that the Jews are allowed to return to their rightful and historic homes in one of our holiest cities.

6 Responses to The Jewish return to Hebron, just after 29th November