Who will rid me of this troublesome Kerry?

Posted on 6 December 2016 by anneinpt

The answer to my rhetorical question in the title is President-elect Donald Trump. 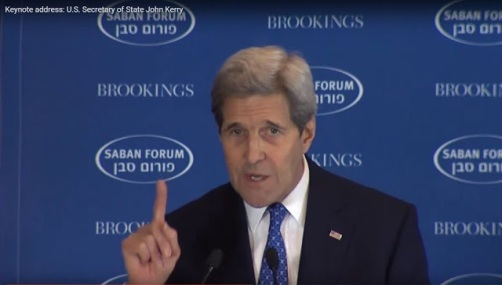 In a parting shot at his nemesis, outgoing Secretary of State John Kerry takes aim at Binyamin Netanyahu, the settlements, and Israel. His Jeremiad sounds awfully familiar, and – yes – he has spouted off the same nonsense time and time again.

Let’s have a look at his latest – and last, thank goodness! – complaints about an Israel that will not heed his warnings:

It seems increasingly unlikely, though not impossible, that the Obama administration will lend its hand to a resolution that might discomfit the Israeli government at the UN, or otherwise seek to bequeath a framework for Israeli-Palestinian peace.

But then comes the rest:

Outgoing Secretary of State John Kerry did a great deal more than discomfit the prime minister and his coalition on Sunday, however. In remarks at the Saban Forum in Washington, DC, Kerry unloaded almost four years of bitter frustration at Benjamin Netanyahu and his colleagues, warned that Israel is heading toward “a place of danger,” and cited the settlement enterprise as the central catalyst for that potential disaster.

A different, brighter future, he indicated, was attainable for Israel. But the settlers were destroying it, he said. And his unfortunate role, he made sadly clear, had been to serve these past four years as the prophet who can see the tragedy approaching, but whose warnings go unheeded.

No, said the secretary, ceding a point to Netanyahu, who had spoken by satellite just before him, the settlements “are not the cause of the conflict.” But, Kerry repeated several times, they most certainly constitute a core “obstacle” to its solution. “Let’s not kid each other here,” he advised. “You can’t just wipe it away by saying it doesn’t have an impact. It does have an impact.”

Oh, bla bla bla. The core obstacle to the solution of the crisis is the Arabs’ refusal to recognize a Jewish state in ANY of the land of Israel. The settlements are a convenient tool, a perfect excuse for a politically correct world where history has been turned on its head and indigenous rights have been reversed, making the occupiers (the Arabs) the “indigenous natives” and turning the Jews into imperialist colonialist invaders.

He didn’t blame Netanyahu personally for utilizing settlements with the deliberate goal of ensuring that there can be no two-state solution. But the Israeli right, Kerry said, was strategically bringing more and more Jews into the West Bank, and locating them in very specific locations, with precisely that goal — to ensure that there could be no viable Palestinian state. And Netanyahu was presiding over the process.

The vast majority of “settlers” (I apologize for the term but I use it as shorthand) are living in greater Jerusalem or the large settlement blocs, which under any peace plan ever proposed are going to remain under Israeli sovereignty. In which case, why is it a problem for Jews to live there?

Next we come to Kerry’s hubris as “Israel’s saviour”:

The way he told it, his has been a thankless task — essentially trying to save Israel from itself,

Sorry not sorry Mr. Kerry. We Israelis know how to look after ourselves a lot better than you can, or than you think you can (small difference).

The ongoing building is backed by the right “because they don’t want peace,” he said flatly. “They want to block peace,” said Kerry. “That’s the history of the settler movement, my friends.”

That is such a disgusting slur and slander against the Israeli right, the settlers, and all of Israel in fact since the government represents the entire country, that really our Foreign Ministry should look into suing Kerry for libel.

Is Kerry implying that Israelis want war?? That we prefer to live by the sword? Does he reference Palestinian terrorism at all? Does he make mention of the violence that descended upon us when we DID cede territory in Gaza?

Or is it simply that what he calls “peace” does not mean what he thinks it means?

“Peace” does not mean surrendering to your enemies, or even simply ceding up front any demands they make of you just to have a quiet life and to bring them to the negotiating table.

“Peace’ means the absence of war, normalization of relations, trade, tourism, cooperation, and the prevention of violence from terrorists and other hostile elements. None of this should be contingent on giving up strategically priceless territory.

Vouchsafing new details of his 2013-2104 deal-making efforts, now that he’s so close to the end of his term, Kerry detailed some of the security provisions that, he argued, could enable a substantial Israeli withdrawal, and facilitate a small, demilitarized Palestinian “city state” in the West Bank. The Jordanians were ready to build a sophisticated security fence on their side of the Jordan Valley, and the Palestinians on their side. Israeli troops would have been able to helicopter to trouble spots in minutes. There were “all kinds of ways” for Israel to deploy its soldiers in times of crisis, he said, referring to the proposals memorably castigated by then defense minister Moshe Ya’alon in 2014 as “not worth the paper they’re printed on.”

Not only were his proposals worthless, even if they had been of value at the time, later developments, such as the “Arab Spring” and the rise of ISIS would have rendered them useless, and worse, would have placed Israel in an untenable position militarily and diplomatically.

…  Stability and tranquility were not out of reach for Israel, Kerry suggested, but wouldn’t be attained if “all the time you are building up your presence” in what the Palestinians see as their state.

But does Kerry have anything to say about the illegal Arab construction in Israel? Not to mention the ongoing destruction by the Waqf on the Temple Mount. Is building illegal only for Jews? If so, there’s a word for that: antisemitism.

And as for that idea beloved by Netanyahu of a regional Arab peace first, and accommodation with the Palestinians somewhere down the line, forget about it. “There will be no separate peace with the Arab world,” he insisted.

Again, events have overtaken Mr. Kerry. Israel is on speaking terms at the very least with many of her most obdurate enemies, including Saudi Arabia, besides “cold peace partners” like Jordan and Egypt.

I was gratified to see that others are of the same opinion as me regarding Kerry’s outrageous statements.

But let’s face it: Even Bozo the Clown would be better than Secretary of State John Kerry.

To be fair to Kerry, he was following the foreign policy spelled out by Obama four years earlier: that America was about to embark on a new path, reaching out to enemies who would suddenly transform into friends when faced with a more gentle and multicultural America — one that “leads from behind.”

Nevertheless, it was Kerry who did most of the shuttling, predominantly to the Middle East, alternating between his many trips to Europe to grovel before his Iranian counterpart, and visits to Israel, where he expressed severe displeasure with Prime Minister Benjamin Netanyahu for not behaving similarly with the Palestinian Authority.

He then professed his concern for the Jewish state, claiming to “want to see this thing develop into the full-blossomed beacon that Israel has the potential of being.” Indeed, he went on, “Israel has all these skills,” in so many realms “that it could be sharing with Egypt, with Jordan, with the Emirates, with Saudi Arabia, with all of these countries. … But the issue is, how do get from here to there?”

Netanyahu could have pointed out that attempting to get “from here to there” has been his guiding principle — one that he has been putting into practice with every Arab and African country that is open to it. This year alone, he has forged friendly relations and cooperation with Cairo. He has even made enormous strides with the Saudis, who consider Israel an ally in preventing Iran from acquiring the nuclear weapons that Kerry and his boss handed the mullahs on a silver platter.

He continued by lambasting settlements, while claiming he understands that they are not the root cause of the conflict, saying that he “cannot accept the notion that they do not affect the peace process — that they aren’t a barrier to the capacity to have peace.”

And here was the clincher. He said he knows this, because “the Left in Israel is telling everybody they are a barrier to peace and the Right supports it, openly supports it, because they don’t want peace.”

And there you have it. Kerry’s utter gall. His accusation that most Israelis oppose peace. Not that we long to live without fear of being stabbed, car-rammed, torched, blown up by bombs and hit by rocket fire by hate-filled terrorists bent on our annihilation. Not that we have relinquished most of the West Bank and all of Gaza to those killers. Not that every territorial withdrawal has been accompanied by an escalation in violence against us.

Meanwhile the indefatigable Elder of Ziyon has done his homework and notes that Kerry outright lied about the basic facts of the Oslo Accords in his Saban Forum speech:

John Kerry, speaking at the Saban Forum this past weekend, said:

Kerry had good reason not to go into it – because it is a complete fiction.

The Wye River Agreement of 1998 did say Israel was to withdraw from a percentage of Area C, but the bulk was going to remain under Israeli control. It was never implemented after Netanyahu, who opposed it, lost a vote of no-confidence. But there were a whole lot of terror attacks in the md-90s that would seem to be a violation of Oslo.

He didn’t mention those inconvenient facts because they do not fit his politically correct world-view where the “poor brown people” can do no wrong and the “white people” (played by the Israeli Jews) can do no right.

For some more interesting reading on Kerry and his malicious ignorance on Israel and the Middle East, read this excellent article about him on the Winds of Jihad blog: “Ignorant Of Islam, Frustrated And Confused About the Middle East, Incapable Of Grasping Reality, Quick To Blame Israel”. It’s from 2013 but still as relevant as ever.

In short, Kerry is a puffed-up arrogant blowhard with a one-eyed view of the world, particularly the Middle East, and the time can’t come quickly enough when we shall see the back of him.

11 Responses to Who will rid me of this troublesome Kerry?