Gaza rioters burn the access routes to their aid

Last week Hamas-sponsored rioters on the Gaza border burned their own aid. This weekend those “peaceful protestors” who only want to murder Israelis and claim victimhood burned the border crossing terminal where the humanitarian aid crosses over to Gaza. In addition they blew up the gas pipeline through which Israel pumps fuel gas.

Just watch this short video to see the extent of the destruction they caused to themselves:

Israeli officials who came to inspect the area were astonished at the scale of destruction:

Military and administrative officials toured the Israeli side of the Kerem Shalom goods crossing with the Gaza Strip Saturday, a day after Palestinian rioters torched gas pipes serving the territory as well as electricity infrastructure and a conveyor belt used to transfer goods into the Strip.

The damage to the crossing is thought to be in the tens of millions of shekels.

On unnamed official told the Ynet news site, “We were astonished by the devastation and destruction Palestinians left in their wake. They’re bringing a disaster upon themselves.”

That last sentence could describe the entire history of the Palestinians, but particularly of Gaza.

Kerem Shalom is the only goods crossing between Israel and Gaza, which already suffers from a severe energy shortage.

Defence Minister Avigdor Liberman has now ordered the crossing to be closed until further notice.

Israel’s Defense Forces (IDF) announced on Saturday that Defense Minister Avigdor Liberman has approved closing the Kerem Shalom humanitarian crossing in Gaza from tomorrow (Sunday) until further notice, due to Friday’s destruction of gas pipelines and the security fence at the crossing.

Israel’s Defense Forces issued a statement on Friday, saying “The crossing will remain closed until the damages caused by the riots are repaired and will reopen in accordance with a situation assessment. The Hamas terror organization, which in recent weeks has been carrying out terrorist attacks in the guise of riots, is harming the well-being of Gazans and paralyzing their ability to go about their daily lives.”

“Israel and many countries around the world work to deliver goods such as food, equipment and fuel to Gaza’s citizens, initiatives which are prevented by the Hamas terror organization’s actions,” the statement added.

Saturday’s statement from the IDF said that Hamas is responsible for everything that happens in the Gaza Strip.

Watch this clip showing how the terrorists set fire to the crossing:

#Israel has closed the Kerem Shalom border crossing into #Gaza until repairs are completed, after Palestinian rioters set fires in the compound which transfers fuel, gas and food into Gaza Friday. Damages to pipes + infrastructure estimated in the millions @i24NEWS_EN #IDF video pic.twitter.com/8Qv5XAr2fy

The following is a list of destruction done to the humanitarian crossing according to the IDF:

-The fuel terminal has been rendered totally unusable.

-Gas pipelines – Damage was caused to connection stations. The main gas line is not functioning at all.

Aggregate conveyor belt – Not suitable for operation at all. Significant damage was caused to the entire structure.

-Security infrastructure of the humanitarian crossing* – Damage was caused to fences, light poles and cameras.

Please keep all this in mind next time some do-gooder or an ill-wisher of Israel accuses Israel of “blockading” or “besieging” or “starving” Gaza. The people of Gaza are none of these things. The only thing they are suffering from is the the rule of Hamas which prefers to shoot itself in the foot (almost literally) rather than let Israel help them.

Today, the day that the US Embassy is to open officially, and the day before “Naqba day”, when the Palestinians mark the self-made catastrophe that occurred when they refused to accept the new-born State of Israel and attempted to destroy it in 1948, suffering a reversal of their expected victory, the IDF is expecting Hamas to push 100,000 “protestors” over the Gaza border with Israel, in order to massacre Israelis:

The Israeli military is gearing up for fierce “March of Return” protests along the Gaza security fence on Monday, with more than 100,000 Palestinians expected to take part, and dire warnings from the IDF that hundreds plan to try breach the fence and carry out a “massacre” of Israeli civilians.

The protests are now set for Monday, to coincide with the move of the US Embassy from Tel Aviv to Jerusalem, and not on Tuesday’s Nakba Day, as was originally expected.

The Israel Defense Forces expects over 100,000 Palestinians to take part in the mass demonstrations and potentially as many as 200,000, something that would indicate a major victory for the Hamas terrorist group, which rules Gaza and has co-opted for its own ends what were originally slated to be weeks of nonviolent protests.

The army’s primary fear during the expected riots is that dozens or hundreds of Palestinians, including Hamas members, will manage to break through the Gaza security fence and wreak havoc in one of the Israeli communities on the other side, attacking residents, starting fires, and destroying buildings.

The military believes Hamas will focus its energies on this style of mass, chaotic attack, but the IDF is also preparing for more direct armed combat, including attacks on troops along the border, or kidnappings of IDF soldiers, as has happened along the Gaza border in years past.

The video is chilling but its dire warning is vital for all of us to be on guard:

This is NOT the video that anyone wants to see this week. pic.twitter.com/gBUIQivyRo

Israel’s Channel 10 news showed clips from what it said were new Hamas videos in which young Gazans were urged into battle against Israel: “Youngsters of the Palestinian revolt… Jerusalem is waiting for your revolution. So show it your firm determination in battle,” one clip urged.

The IDF is taking the threat very seriously indeed:

Hamas’ cynicism is breath-taking (but not surprising to those who know this terror organization):

The riots thus far have stopped short of a full-fledged war, which would likely result in Hamas getting pummeled by the IDF, but have served to direct away from Hamas the anger and frustrations felt by Gazans, who suffer from one of the highest unemployment rates in the world and lack regular access to electricity and clean drinking water.

“They are putting pressure on their people and ‘exporting’ that pressure toward Israel, the Palestinian Authority, and the international community,” a senior official in Israel’s military liaison unit to the Palestinians told reporters on Sunday, speaking on condition of anonymity.

The past seven Fridays have seen between 5,000 and 40,000 Gazans taking part in the “March of Return,” beginning on March 30 with Land Day, marking the expropriation of Arab land by the Israeli government in 1976 and ensuing protests in which six people were killed, and ending on May 15 with Nakba Day, which commemorates the displacement of Palestinians from their homes amid the creation of the State of Israel. 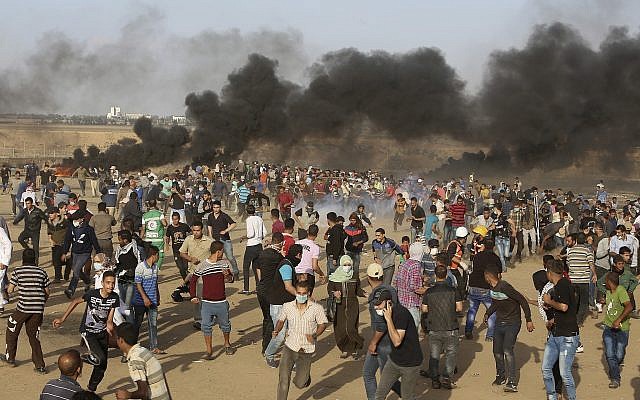 During these violent protests, Palestinians hurl rocks and Molotov cocktails at IDF troops, roll burning tires at the security fence or try to pull it down with chains. Increasingly, demonstrators have been flying kites laden with containers of burning fuel to start fires in Israel.

Hamas is now looking to take advantage of the new realities in Israel by continuing with its “protests”:

Initially, the IDF believed that these protests would reach their peak with Nakba Day on May 15, but Military Intelligence assessments now indicate that Hamas will seek to “piggyback” on the spectacle of Monday’s US Embassy move in order to draw international attention to their cause.

The contrast between the cruelty and cynicism of Hamas and the morality and humanity of Israel could not be more clear, as expressed by this officer:

The officer from the Coordinator of the Government Activities in the Territories unit said Sunday that Hamas has recently taken steps to increase the stress on Gaza residents, most recently by barring Gaza fisherman from working beginning on Monday.

“And now, me and my commanders are breaking our heads trying to figure out how to get medicine into Gaza,” the officer said.

They succeeded, sending six trucks worth of medical supplies into Gaza on Sunday.

And that, dear reader, tells you all you need to know about the “March of Return” – it is nothing more than a cover for the attempt to kill Israelis. And if hundreds of Palestinians die in the attempt, well, Hamas consider that a win-win situation.

It is beyond sickening. It is the depth of depravity.